DINOSAURS: Walking with Dinosaurs is Coming to the Honda Center! | @DinosLive #Anaheim #spon 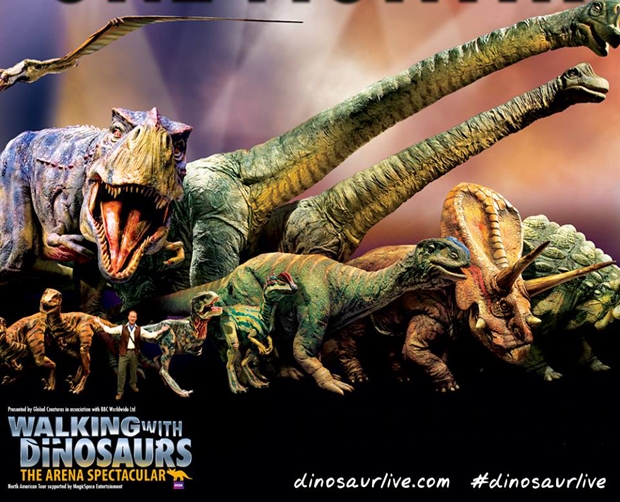 I can't wait!  My children LOVE dinosaurs and there is an event next week that will make them sleepless with excitement!  Walking with Dinosaurs: Arena Spectacular!
The last time my Walking with Dinosaurs was in Northern California, my kids were in diapers and all of the shows sold out!  I can't wait to take my little dinosaur diggers to experience dinosaurs in the most realistic dinosaur experience ever!

Variety said, “The dinosaurs are stunning, life-size and faultlessly nimble. In act one, the beasts parade into the arena gnashing and cavorting as a safari-suited paleontologist describes their attributes … in the second half, the action cranks up, culminating in a spectacular clash as a T-rex mom defends her baby from predators. Sonny Tilders' triumphant creature design ensures ‘Walking With Dinosaurs’ is a truly spectacular spectacular. It is everything a dino-phile could want.”
The show depicts the dinosaurs’ evolution with almost cinematic realism. WALKING WITH DINOSAURS THE ARENA SPECTACULAR has scenes of the interactions between dinosaurs, how carnivorous dinosaurs evolved to walk on two legs, and how the herbivores fended off their more agile predators.


Ten species are represented from the entire 200 million year reign of the dinosaurs. The show includes the Tyrannosaurus Rex, the terror of the ancient terrain, as well as the Plateosaurus and Liliensternus from the Triassic period, the Stegosaurus and Allosaurus from the Jurassic period and Torosaurus and Utahraptor from the awesome Cretaceous period. The largest of them, the Brachiosaurus is 36 feet tall, and 56 feet from nose to tail. It took a team of 50 – including engineers, fabricators, skin makers, artists and painters, and animatronic experts – a year to build the production.

The history of the world is played out with the splitting of the earth’s continents, and the transition from the arid desert of the Triassic period is given over to the lush green prairies and forces of the later Jurassic. Oceans form, volcanoes erupt, a forest catches fire -- all leading to the impact of the massive comet, which struck the earth, and forced the extinction of the dinosaurs.
This new show will have updated dinosaurs based on the latest scientific research including the likely feathering of some species.  Over eight million people have seen the show in 243 cities and over 2000 performances and I can't wait to add my family to those numbers!

During its North American tour (2007-2010), the production won the THEA Award for Outstanding Achievement in Touring Event and the Billboard Touring Award for Creative Content as well as the Pollstar Concert Industry Award for Most Creative Stage Production and the ILMC Arthur Award for Best in Show. The THEAs recognize excellence in the creation of compelling educational, historical, and entertainment projects; and both the Billboard Touring Award and the Pollstar Concert Industry Award recognize a show or tour that creatively expands what is offered on the road. The ILMC (International Live Music Conference) Arthur Award for Best in Show recognizes theatre shows and family entertainment.
Next week, Walking With Dinosaurs the Arena Spectacular is making an appearance at the Honda Center for only eight performances from September 3 to September 7th.  It will be at the Staples Center for eight shows from September 11 to September 15th.


WALKING WITH DINOSAURS -- THE ARENA SPECTACULAR

DISCLAIMER:  My family will receive tickets to the show in exchange for sharing my experiences.  All thoughts and ideas are my own.  All photos are used with permission.