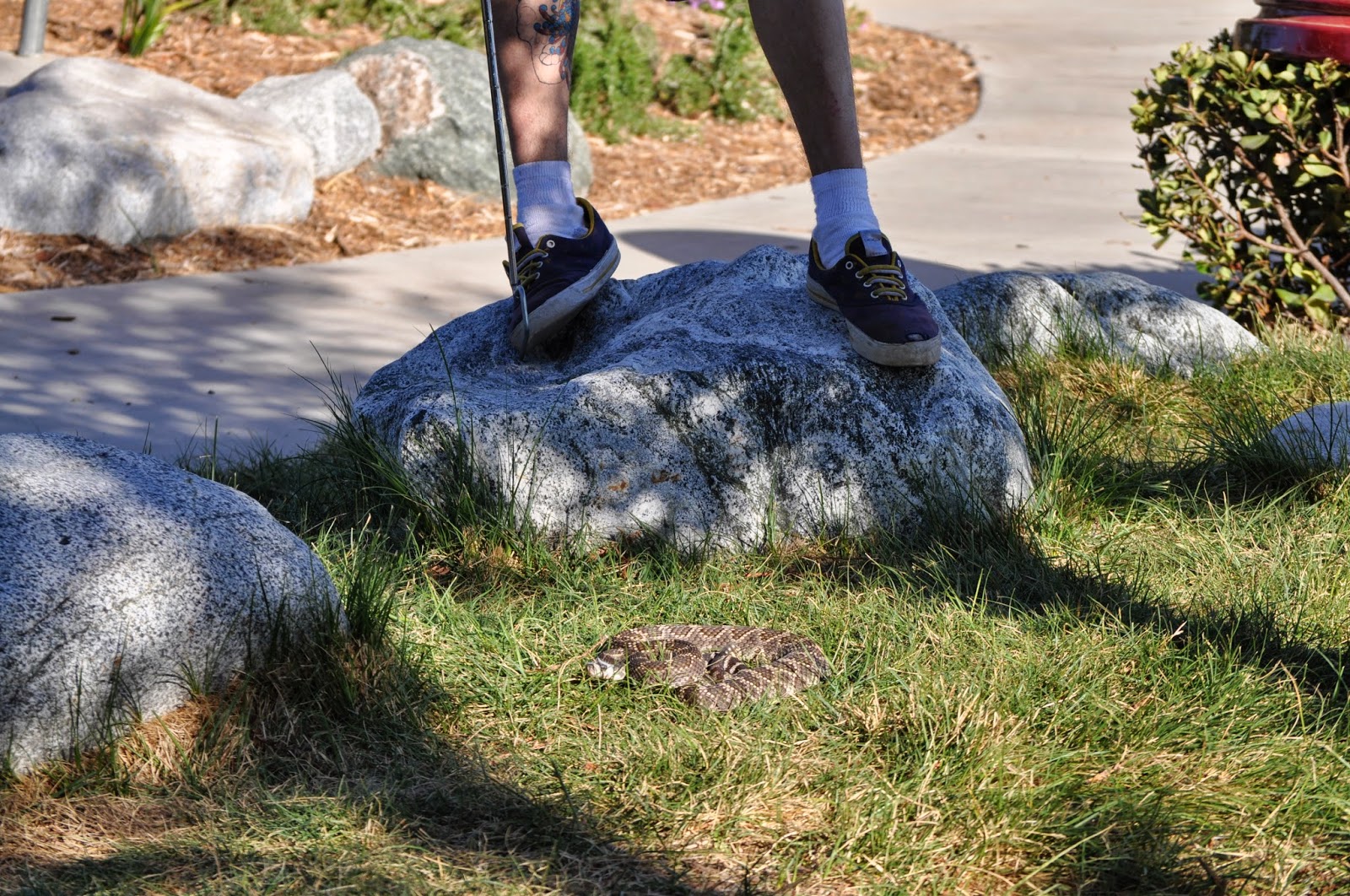 We often bring our dog, Brittany, with us camping and I worry that she might not see them either!  While anti-venin is a cure, it is often not available in a timely manner for your pets.

There is a vaccination that pets can receive to build up an immunity to snake bites but it must be built up over many administrations and that can get expensive.  It is also only good for the specific kind of snake that it is for.

What else is there?  Snake avoidance training for your dogs!  Why?
I took my Brittany to the Bass Pro Shop snake avoidance class and was very impressed by the way they handled the session. 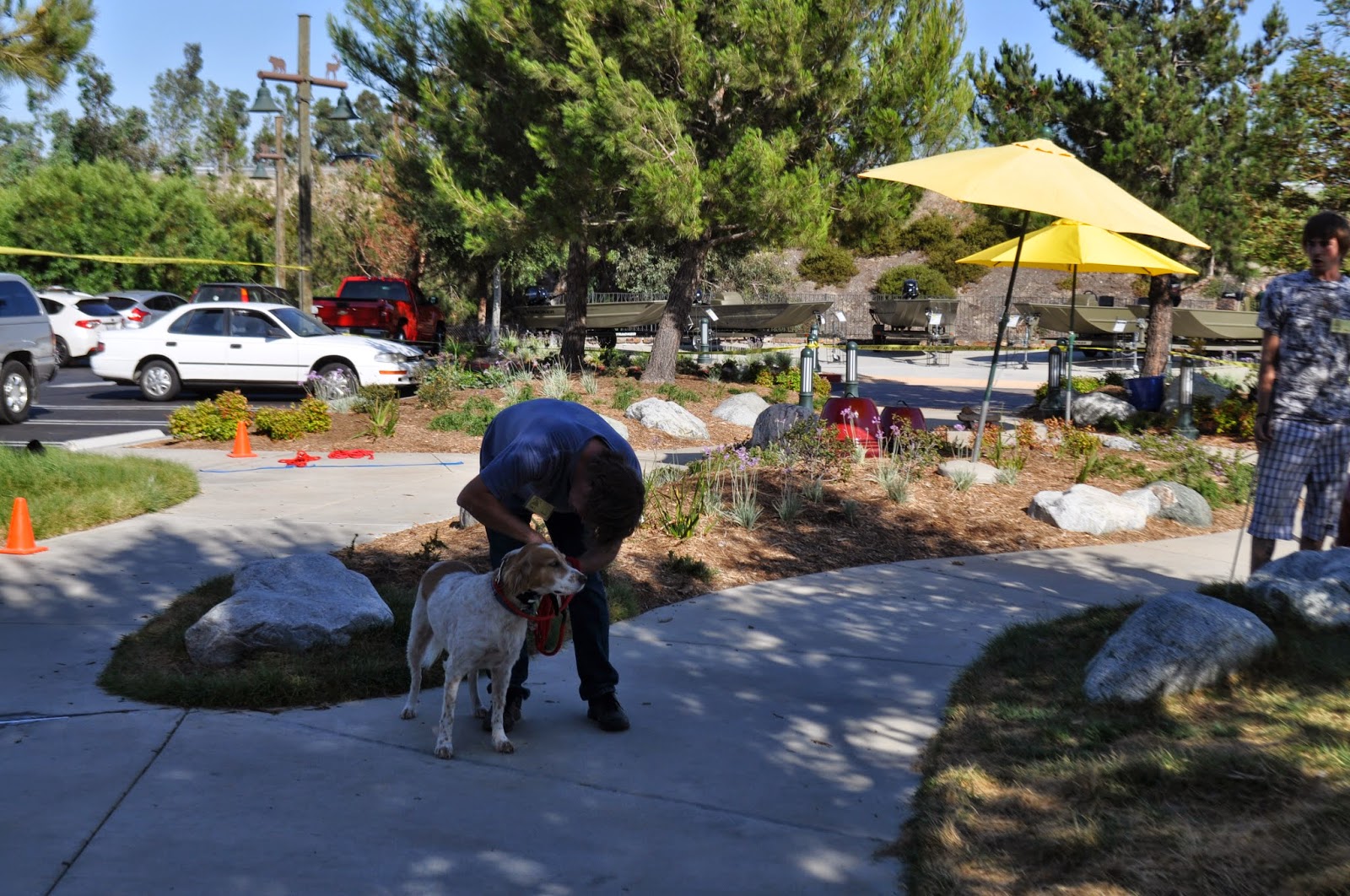 I thought she would handle the snakes in stride and avoid them at all costs but it is a LEARNED behavior that dogs should know.  The trainers at the session taught us that dogs do one of the following:
Singleton's uses live, un-caged rattlesnakes at each of their Scenario Stations to train your pet to avoid the sight, sound, and smell of rattlesnakes.  They milk and double-muzzle our snakes for the protection of all during the clinics, and remove the muzzles at the end of each clinic day.

WARNING:
I must warn you, the trainers use a shock collar to reinforce the impact of a snake bite in way that makes the dog avoid the snakes at all costs.  Even though I knew that the shock collar would temporarily hurt her, the risk of her being killed by a snake bite was stronger.

As she was led towards the grass where the snake laid in plain site, she didn't even see it until it struck her on the nose!  Again, the snake was completely safe as it was milked and muzzled.  The need for the shock collar was to simulate the bite without long lasting pain/injury.

I won't lie, she YELPED when the collar went off!  They led her to the snake again and she refused.  She just plain sat down.  She was still her happy-go-lucky self but she would not stop looking at the snake!  She passed the first test.

The next test involved a snake in plain view crossing the sidewalk.  The training was already taking effect and she refused to go near this new snake. 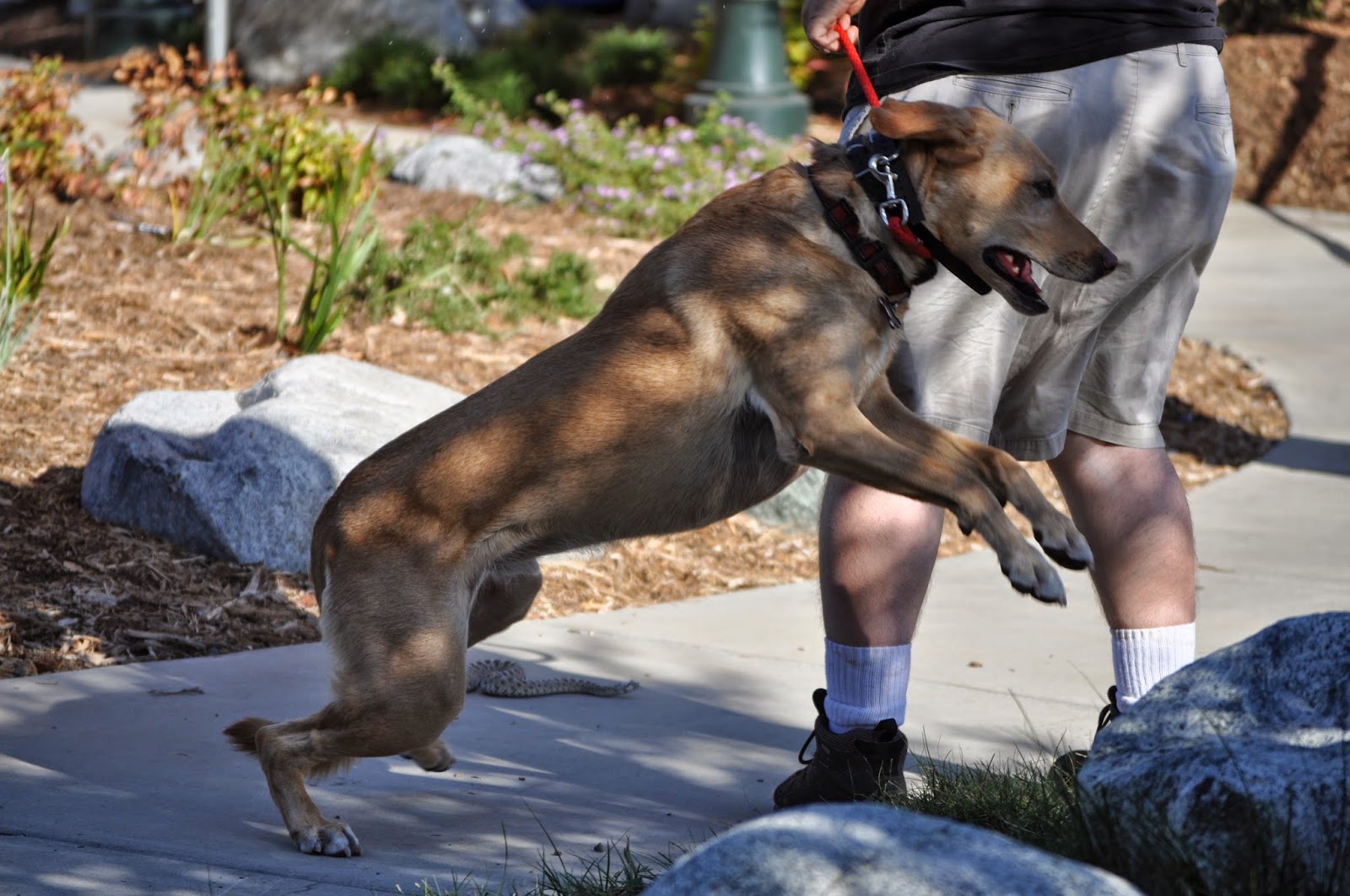 The next training was to see if obedience would overpower the training.  A snake was lying in the grass between her and I.  I was told to call her to me knowing that the snake was between us.  After much hesitation, she went to the farthest end of her 20 foot leash and went around the snake to me.

The smell test was interesting, there were scent marked rocks with skin hidden in an area away from other snakes.  While I walked her toward the rocks, she "bumped" me trying to get me to change my direction.  I persisted and while she bumped me several more times, she reluctantly hid behind me and let me lead.  She refused to go near the rocks. 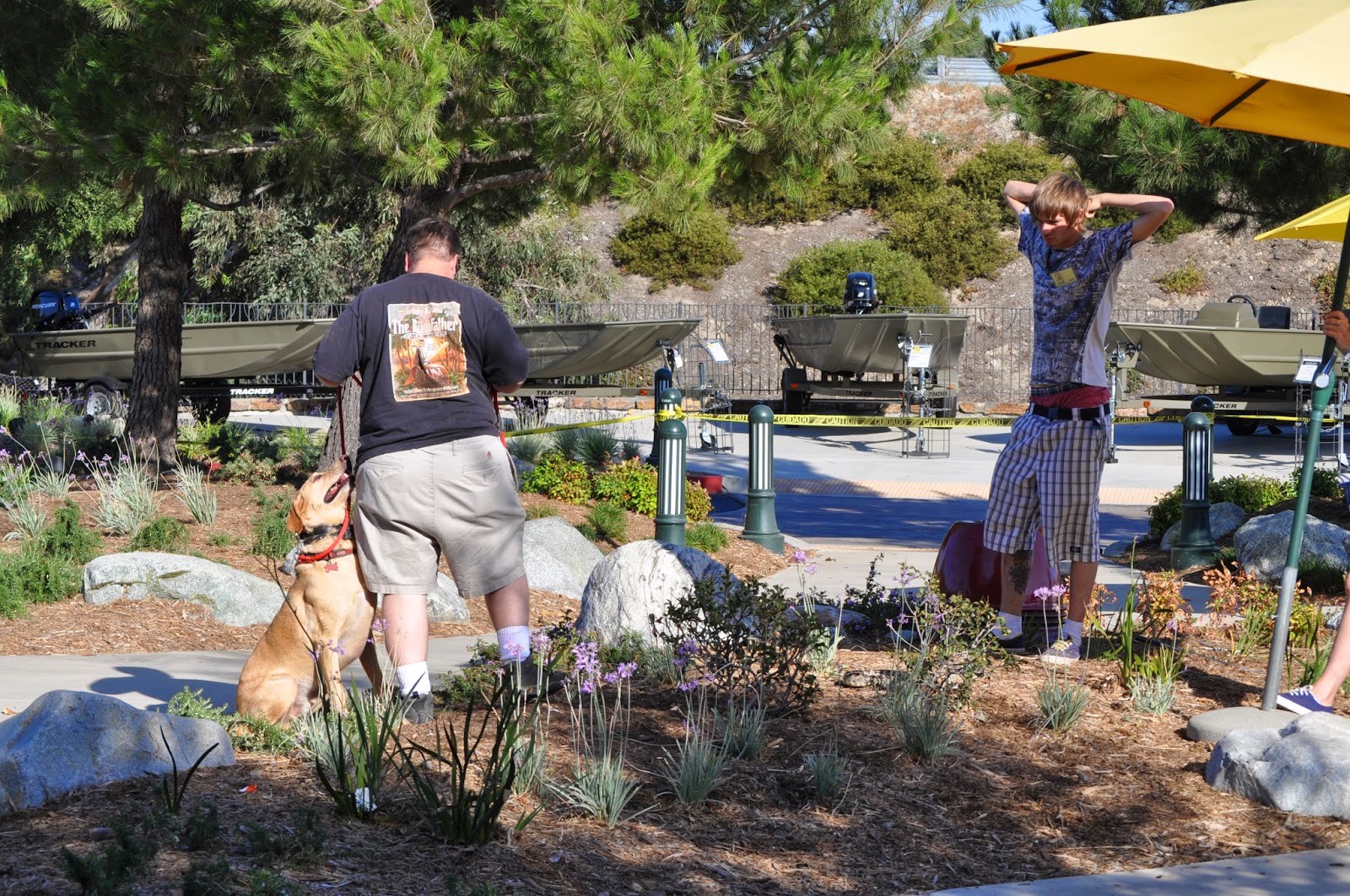 The last test involved nothing but the sound of a snake rattle in the bushes.  I don't think she reacted as well with the sound as the other tests but she eventually got it.

She passed with an "A" and I was told that if we had any other concerns or felt she needed a refresher course, it was free annually for re-checks.

We stayed and watched several other dogs go through the tests, curious if all dogs acted the same.  You know what?  For the most part, they did!

There was one exception where an older rescue dog had such a high tolerance of pain that he didn't jump at all even when the snake struck.  The trainers quickly found out the cause and worked with the dog and eventually received a "B+". 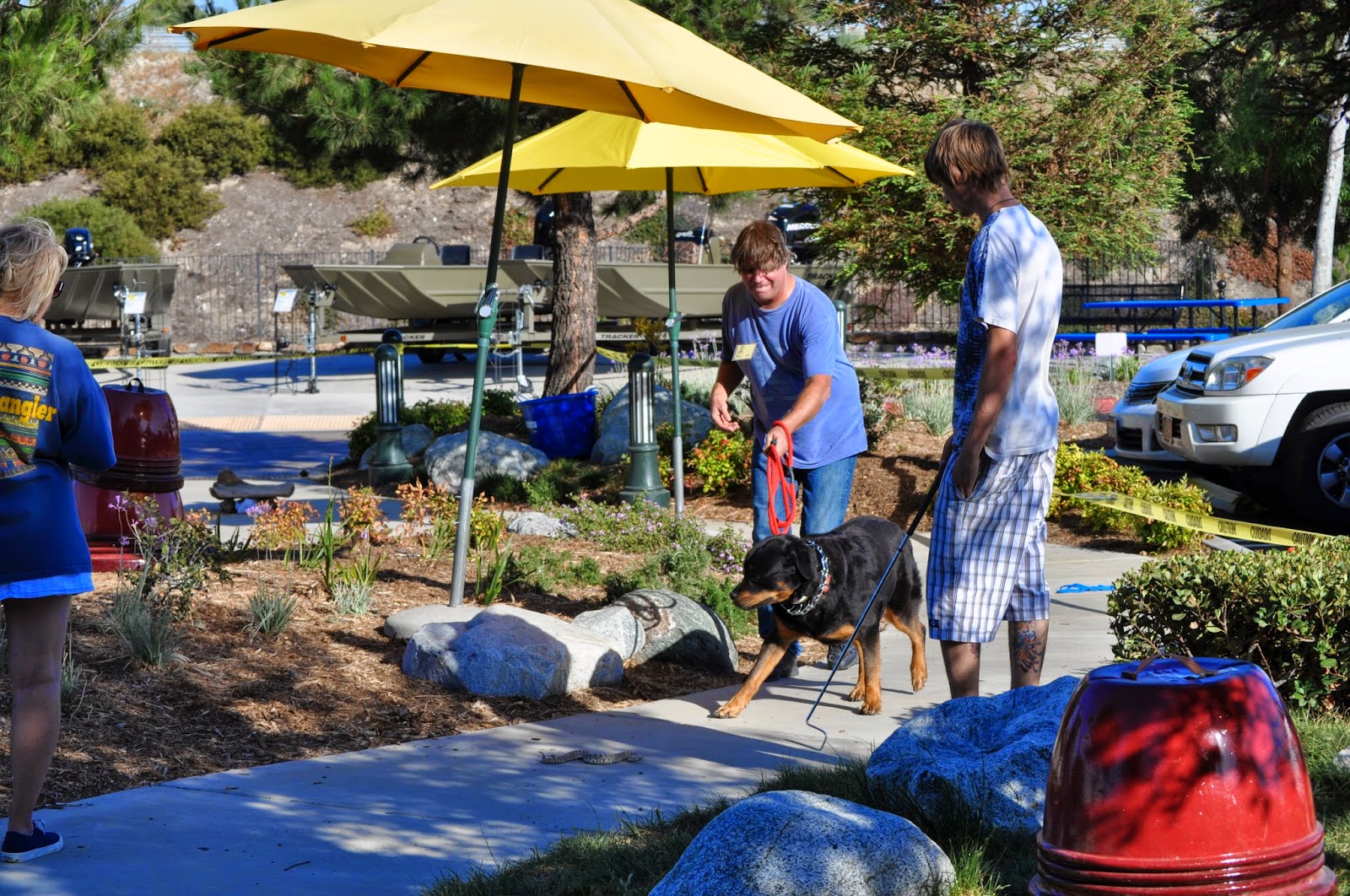 I feel better that knowing that I am doing all I can to keep my family safer while in nature by preparing for the eventual meeting with snakes.  I can talk to my children about snakes and avoidance, unfortunately, my dogs don't understand English. :-)

If you are interested in participating in one of the classes I took, they will be back at Bass Pro Shops- (Rancho Cucamonga) on Saturday and Sunday 9am-5pm on the following dates:

See more at: http://blogs.basspro.com/blog/bass-pro-shops-rancho-cucamonga-ca/rattlesnake-avoidance-classes-for-you-and-your-dog#sthash.g3LmWW9G.dpuf DISCLAIMER:  This is not a sponsored post.  All experiences and opinions are my own.  Do not use any photos without permission.