Yesterday, I took my family to Monster Jam for the first time courtesy of Feld Entertainment! The only time any of us had seen monster trucks before, was a few weeks ago.

I really didn't have too much of an idea of what went on at a Monster Jam so everything was new to me. What I thought we would see was a lot of demolition with a ton of cars getting smashed up without much rhyme or reason. That could not have been too much farther from the truth!
The first part of the show were fun races of Sprint cars that zoomed across the track, often on two wheels or less. They got us in the mood for what was to come and soon we heard the tell-tale rev of the 1500+ horsepower engines. Monster trucks stand around 12 feet tall and have over 5 foot tall tires. The rumbling of the trucks entering the stadium could be felt throughout our bodies. 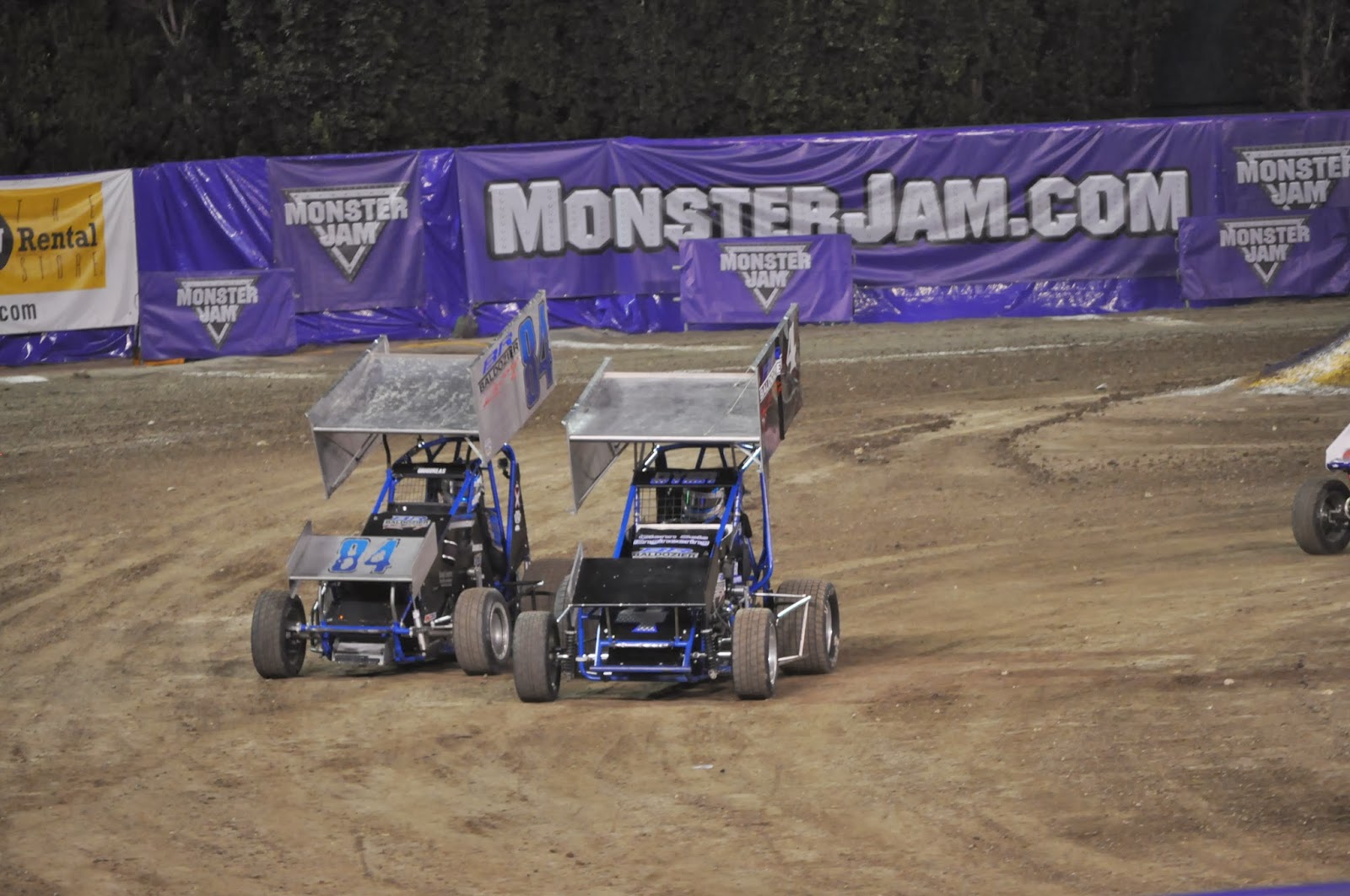 One thing that I was not prepared for was the extreme noise. The veteran Monster Jam goers had noise cancelling headphones and most of the children had some kind of ear protection. If you forgot your headphones, they are available for purchase at the souvenir booths.

The 15 trucks paraded into the stadium and lined up for the qualifiers. 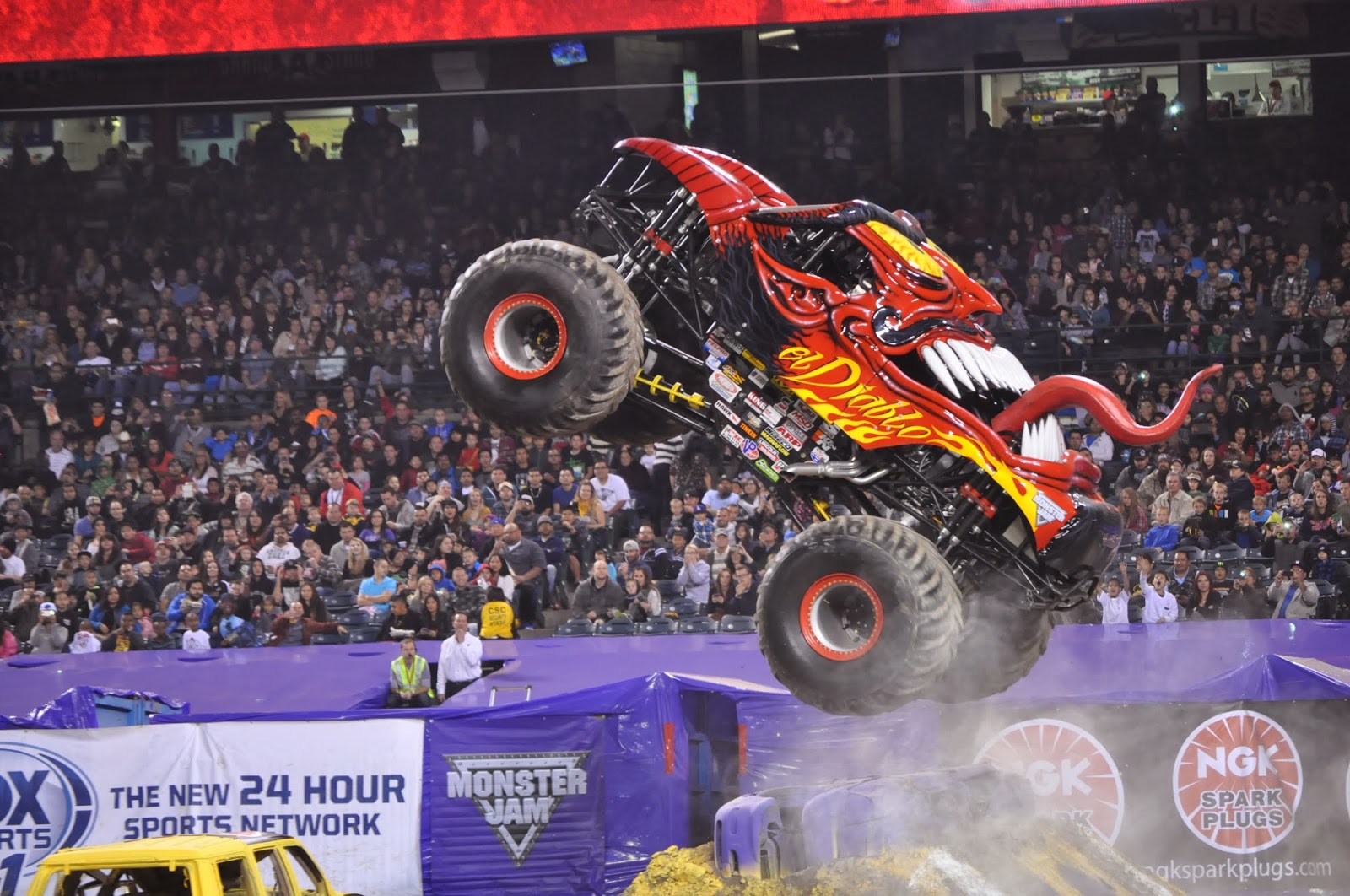 El Diablo leaped ahead of the competition early on.

The battle of the super heroes commenced with Batman coming out on top over Ironman. 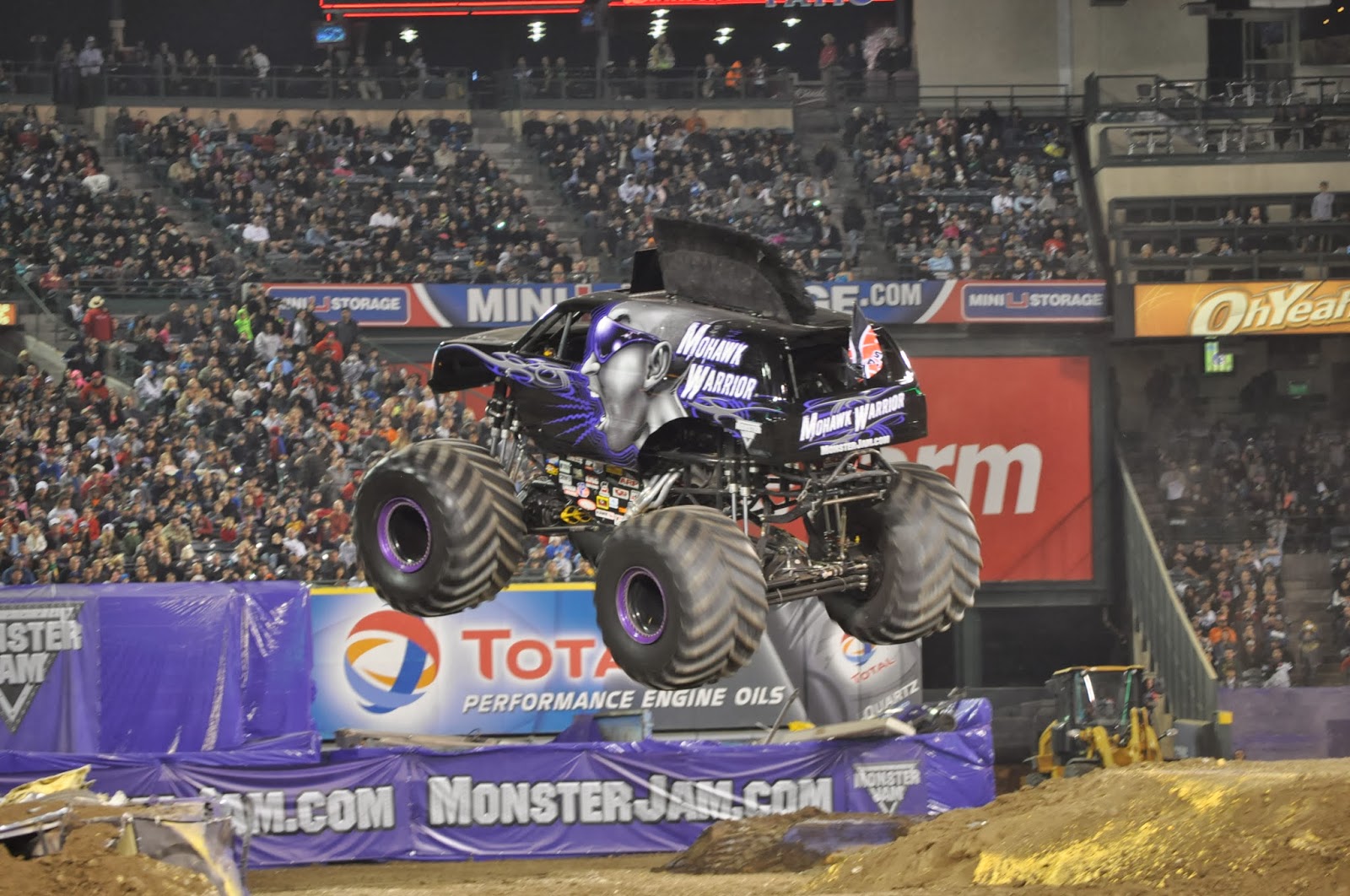 My early favorite was the Monster Energy truck, he beat his competitors in the semi-finals but was outraced by Mohawk Warrior in the final round.

The fastest round went to Mohawk Warrior with a time of 22:25 giving him the trophy.
After the racing rounds, an intermission occurred with the funniest and most unexpected entertainment I had seen in a long time.  I am not sure what the official name of it was but I call it the Trailer Races.  The Trailer Races were stock cars pulling a variety of trailers in a almost demolition type race.  Imagine travel trailers, boats and even an ice-cream cart racing around a cramped track... crashes were inevitable.
The cars didn't make it one time around before they crashed into each other.  Flames, pileups and even a switcheroo made it comical and heart-stopping as flames and smoke filled several of the cars with the drivers trapped inside.
When all of the cars were inoperable, the race ended with no clear winner except the audience.

Onto the event that everyone was waiting for, the Freestyle!  There are even "thrones" for the victors of the races, who will end up owning it at the end of the night?
The Freestyle races start with drivers choice of jumps for 50 seconds and 30 seconds of "bonus time".  The trucks are score to 10 in 3 categories and then bonus points added to it.  The goal of the Freestyle is to jump higher and crazier than the rest of the trucks while finishing with a spectacular finish.
Taryn Laskey, driver of the Monster Mutt, had a spectacular round and was the first to take the "throne".

I have been a fan of motor-sports for years and while I hadn't had the chance to watch monster trucks, I hadn't given it much thought but I thought it was a male driven sport. I was down-right ecstatic to see a woman pull off her helmet after her spectacular run! I LOVE surprises like that! Go WOMEN!
Run after run the trucks jumped higher and farther. Some landed so hard that wheels, axles and gear-boxes were damaged. Several rolled smashing the the tops of the trucks and some were even able continue after to win!

Mohawk Warrior made great run but rolled over in the bonus time, unable to get the maximum bonus points.

El Diablo made so many vertical jumps and runs it seemed like it was mocking the competition.

With the most incredible jumps and recovers, the race was down to three.  Northern Nightmare, Titan and Grave Digger.  Titan looked like a clear winner as it jumped the highest of all and into the throne!
One last run to go.  Grave Digger was clearly the fan favorite and we were on the edge of our seats through out the run.  The unthinkable happened and it rolled, all over... but NO!  The driver rolled, recovered and went on to win the Championship!  WOW!

The 3 hours we spent at Monster Jam was like being on a roller coaster! Just when I thought there was a clear winner or favorite, I ended up cheering for them all. I have no voice and no hearing(no ear protection) and my body is sore from jumping up and down! I didn't know what to expect when I arrived at Monster Jam but I sure do now! I still don't have a favorite since every truck I saw, changed my mind.

I plan on trying to attend Monster Jam every year at least once. It was INCREDIBLE!

A few things that I recommend for others interested in attending would be:
The next Monster Jam is February 8th, 2014 at Angels Stadium. If you haven't been, it is an experience you don't want to miss! To see the full schedule and purchase tickets around the nation, check out their website.

DISCLAIMER: My family received media passes to review Monster Jam. All thoughts and ideas are my own. Do not use any photos without permission.
Posted by Knotts Scary Farm 2019 at 6:30 AM