The Croods: Behind the Scenes Tour of @DreamWorksAnimation #TheCroodsDVD #GIVEAWAY

I think everyone at some point believes they could be a movie star, right? I have lived in California all my life and have lost track of how many times people have asked me if I see movie stars!

Well, yes, I have seen movie stars in my life but it isn't like they live next door. A couple weeks ago, I got the opportunity to visit DreamWorks Animation Studio to check out the release for The Croods DVD/Blu-Ray/Digital HD through Fox Home Entertainment. I got the chance to go behind the scenes and see how some of the magic was created.

While I had visited a couple movie studios in the past, I had never had the opportunity to visit Dream Works and frankly, I was excited! DreamWorks Animation Studios have given us children's masterpieces such as Ice Age, How to Train Your Dragon, Shrek, Madagascar, and more recently, Turbo and The Croods.

The Croods is scheduled to arrive on shelves on October 1st. For the first time watchers can enjoy "Belt"(the sloth), Dun Dun Duuuuuning in their own homes. In fact, watchers can watch it anywhere they want by downloading the Digital HD copy onto their tablet, laptop or phone! You can even download Belt's favorite saying as your ringtone!

When I arrived with Erin of Horsing Around in LA, I was instantly impressed! The grounds were beautiful! We arrived at our media table where we were greeted by Belt himself. After a couple of pictures, we were treated to breakfast by our hosts. 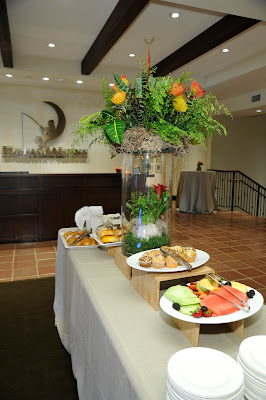 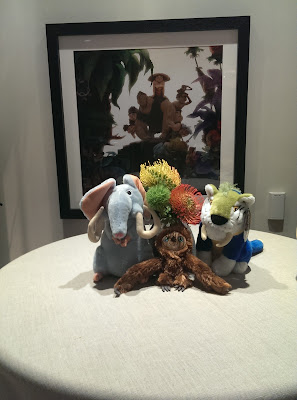 While we awaited others to arrive, we learned about the new Croods Movie StoryBook App which you can find in the App Store. This is a neat program that allows the artist to color the characters and background in choice colors, record your own voice and create your own story. 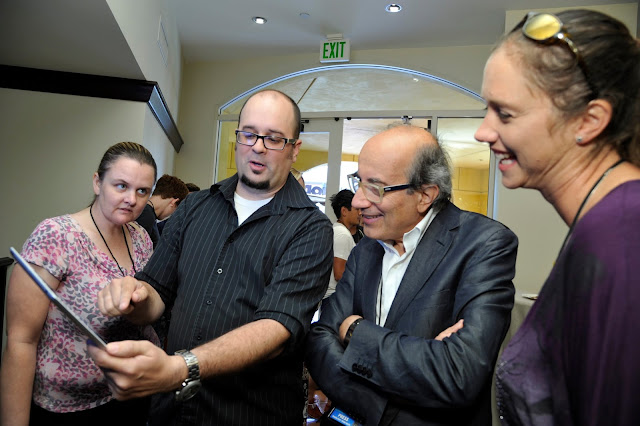 We filed into the screening theatre that is used for employees to watch upcoming films. The creators of The Croods (Chris Sanders & Kirk DeMicco) gave us a little behind the scenes 3D explanations of how The Croods came to be. Did you know that Belt wasn't supposed to be a big character? The Sabertooth Tiger got upstaged! 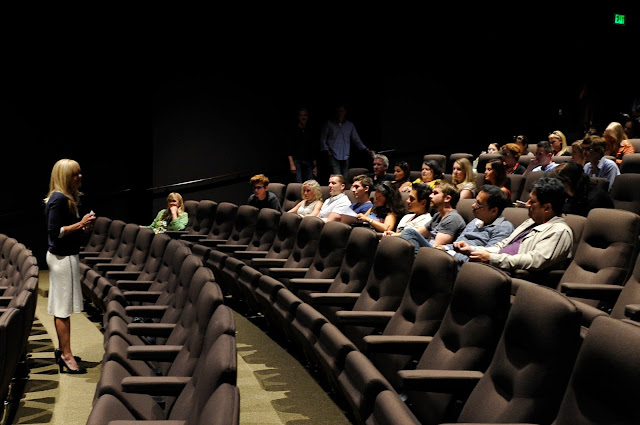 Next it was time for class! What kind of class would we attend at Dream Works Animation Studio? Drawing of course! Sean Sexton of the Croodaceous Creatures Illustration Master Class, turned our stick figures into realistic looking characters by drawing step by step. Here is one of my drawings, what do you think? Yeah, I won't quit my day job but it sure was fun! 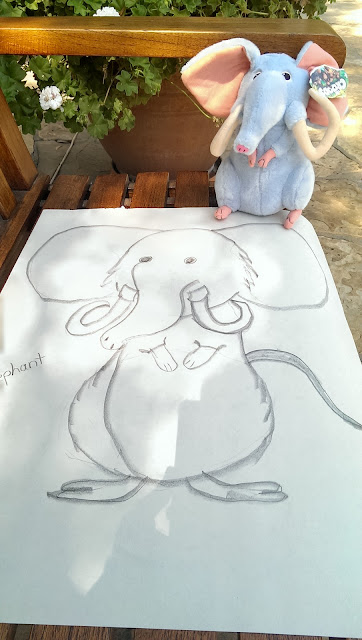 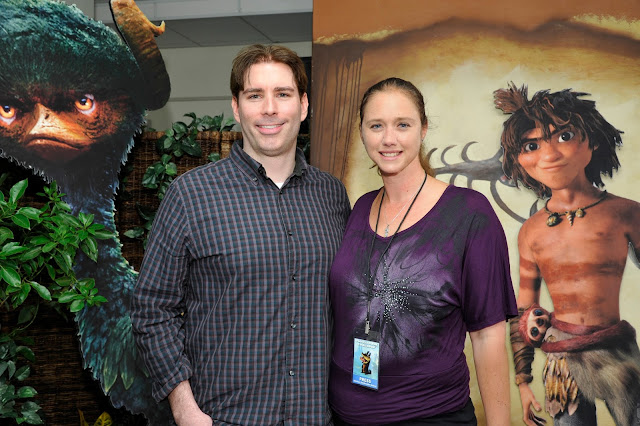 A tour of the beautiful Dream Works grounds was next. WOW! If I ever get creative and think I have a chance at being an artist, I want to work here! All around the studio they seemed to take the beauty of the campus and match it with the imaginations of the creators. I can see how so many great movies come out of this campus. 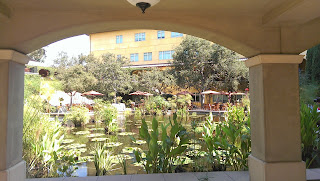 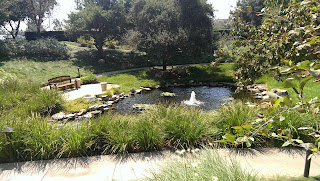 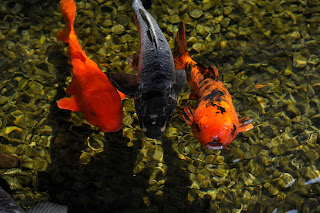 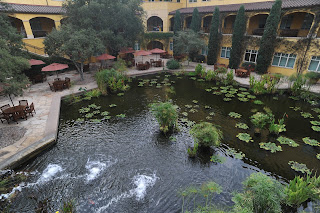 We took a tour of the sound stage where so many voice actors had worked. What a cool place! There are up to 40 people working the technical side of it on any given movie! There were much fewer for The Croods.

My favorite part of the tour was Animation 101. In this class, we learned about the great motion capture tools. They use 53 markers on the actor's bodies to capture their natural movements. You can see the screen behind them capturing every move. In this scene, we watched Eep seeing fire for the first time as she meets Guy. WOW! I got the chance to be the "cameraman" to give movements and ideas to the "directors". The cameraman directs the actors into possible scenarios for the future film. 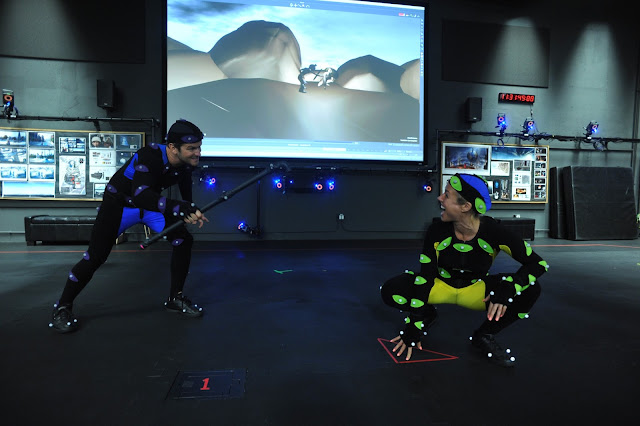 After our tour, we were treated to a "typical" employee lunch of Barbecued Buffalo Chicken, Tri-Tip, fresh vegetables, fruit, and salad. To top it off, there were s'mores for dessert! There is also a Taco stand to choose from as well.

After lunch, we had the opportunity to ask questions of Chris Sanders & Kirk DeMicco. As the creators of The Croods and many other movies, we were able to get an inside look on the dynamics of how The Croods came to be. The dysfunctional family dynamics that any and all families can relate to in some form! Long road trips as a child might have played a part in the movie's genetics. 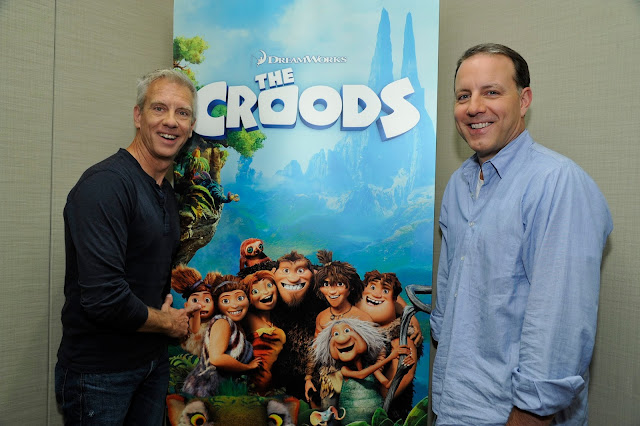 As if our day wasn't spectacular enough, we had the opportunity to take more pictures with Belt and then learn about shoes from Eep's Shoe Clinic with Line Andersen, Mr. Kate and Ugg Australia! Mr. Kate is a design and craft artist who is a blogger in her own right. Thanks to Ugg Australia, we were provided with our own set of Ugg Boots to design any way we would like! We had a variety of beads, shells, stones, and paint to do what we pleased with a master craftswoman to assist. How do you think mine came out? 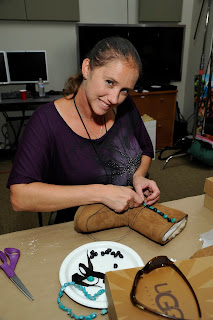 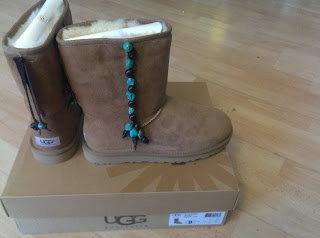 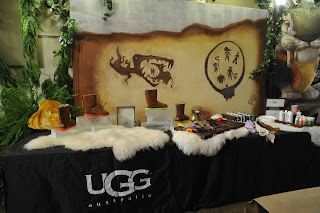 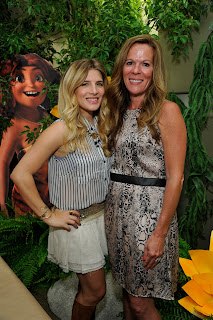 I cannot thank Fox Home Entertainment, Dream Works Animation Studio and Ugg Australia enough for the unbelievable memories I made that day! I had no idea of how much work went into the final cut of an hour and a half film! I hope to be able to visit their beautiful campus again in the future and until that happens, I will look at my beautiful Ugg Boots and remember this day.

Would you like to take The Croods DVD/Blu-Ray home with you? The winner of this giveaway will also receive a plush "Belt" to take home! Enter below.
a Rafflecopter giveaway

DISCLAIMER: We were invited to a special media event to celebrate the release of The Croods coming to Blu-Ray/DVD. All opinions are our own. All images courtesy of Twentieth Century Fox Home Entertainment (unless where indicated) and used with permission.
Posted by Knotts Scary Farm 2019 at 10:00 AM