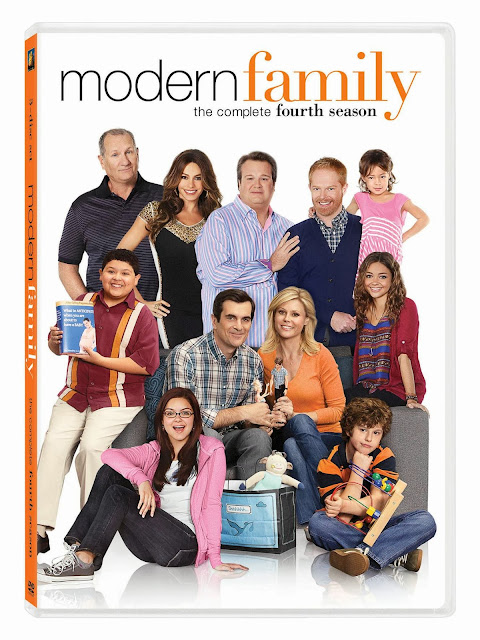 The Modern Family is the #1 rated show on TV!
The Emmy Awards for Outstanding Comedy series keep coming!  This is the 4th season about to be released to DVD/Blu-Ray on Septemeber 24!

Synopsis:
The laughs — and the awards — just keep on coming for the #1-rated “Modern Family,” winner of three consecutive Emmy®Awards for Outstanding Comedy Series! With Jay and Gloria’s baby on the way and Haley going off to college, the entire Pritchett/Dunphy clan faces some major surprises as they bicker and bond over house-flipping headaches, unwanted play dates, and everything from hot-tempered hormones to in utero karaoke.  Featuring a stellar array of guest stars including Matthew Broderick, Shelley Long and Elizabeth Banks, Season Four takes a heartfelt and laugh-out-loud hilarious look at what it means to be a “Modern Family.”
Special Features:
·         Deleted and Alternate Scenes
·         Commentary on “Party Crasher”
·         Commentary on “Fulgencio”
·         An Addition to the Family
·         A Day with Eric
·         Commentary on “Career Day”
·         Commentary on “Goodnight Gracie”
·         A Modern Guide to Parenting
·         “Modern Family” Writers
·         Gag Reel
I have a copy of the 4th Season of Modern Family to give away to to one lucky winner!
Enter below to win!
a Rafflecopter giveaway
DISCLAIMER:  I received a copy of the DVD to review for the post. All thoughts and ideas are my own.  Do not use any pictures without permission.
Posted by Knotts Scary Farm 2019 at 9:44 PM