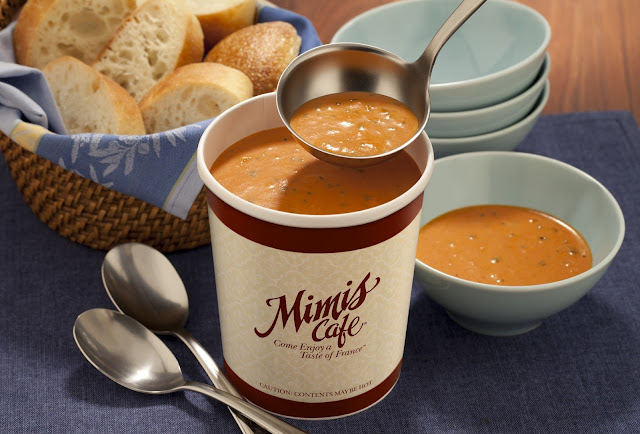 Did you know that Mimi's Café has French origins?

"Stationed there during the final days of World War II, young Arthur J. was taken by the friendly neighborhood bistros and warm, inviting cafés. Arthur J. loved the simple yet charming meals. He savored the aroma of freshly baked breads, café au lait and the company of good friends raising toasts all around. Equally captivating was a mademoiselle he met by chance, who went by the name of Mimi. Arthur J. Simms never forgot his days in France. In 1978, he opened the first Mimi's Café® – a neighborhood bistro inspired by his memories of Mimi and passion for good food, wine and camaraderie that he remembered so fondly".

Mimi's Café is returning to those roots. Under the ownership of French-owned Le Duff America, Inc.,
Mimi’s Cafe is launching redesigned menus. Opening last week, is a breakfast that would bring you to the Chateaus themselves!
I was invited to a media preview to check out the new menu before it hit the restaurants! With help from head chef, Katie Sutton and the CEO, Phil Costner, we learned the process that went into bringing their new menu to light. They are very passionate about
their trade! 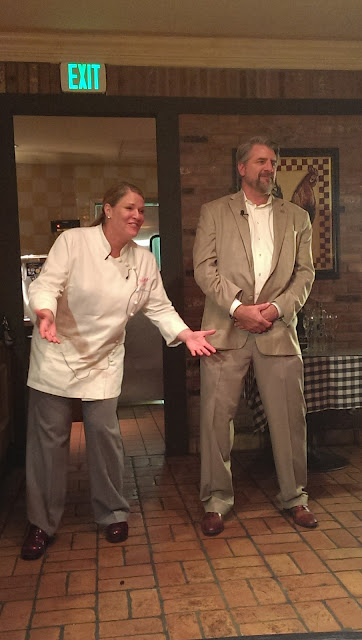 I was invited to taste their new French menu with a handful of my closest blogging friends.  Whenever you get good friends and great food together, fun things happen.

We started off with drinks and appetizers.  Many of my friends had not tried mussels before and some were very apprehensive.  With encouragement and assurance, they found them to their liking. 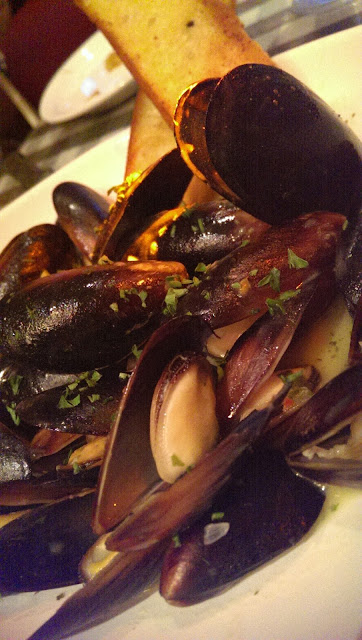 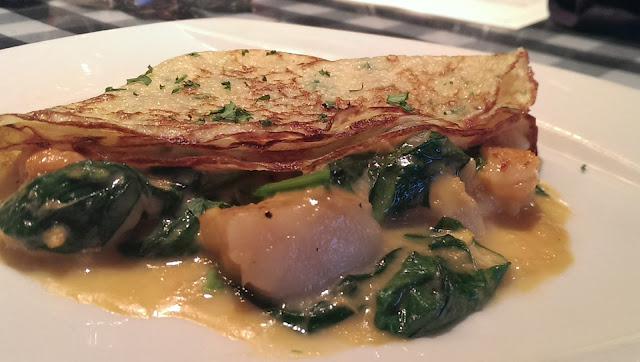 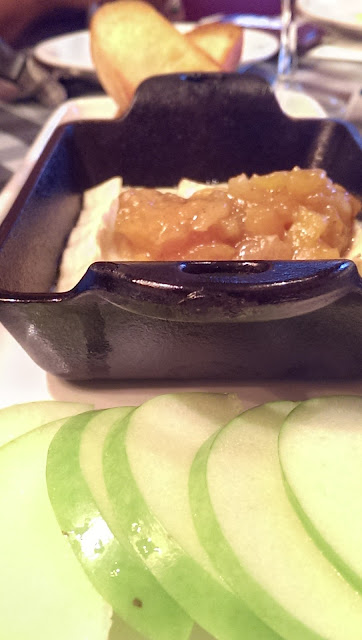 For the main course, I chose the Pasta Carbonara a la Mimis, linguine tossed with dice prosciutto, aged Parmesan, petite peas and a light chardonnay sauce, topped with a fried egg. It was a delicious dish especially if you love prosciutto like I do. 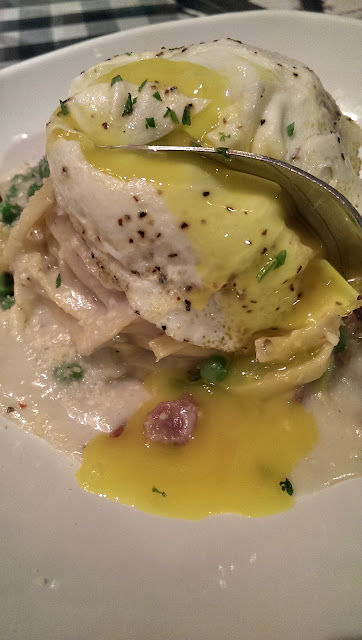 Some of the other delicious meals we were treated to included  Bistro Bavette Steak, a French-style grilled steak with mushroom infused au-gratin potatoes and your choice of bordelaise or bearnaise sauce and seasoned vegetables. 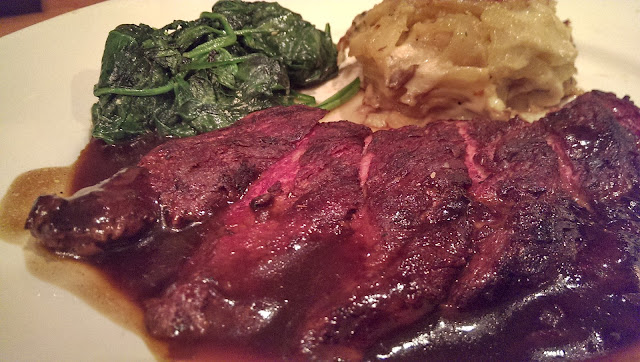 The Saint-Malo Pasta is mussels and fresh linguine topped with a spicy pomodoro sauce, served with garlic French baguette croutons. 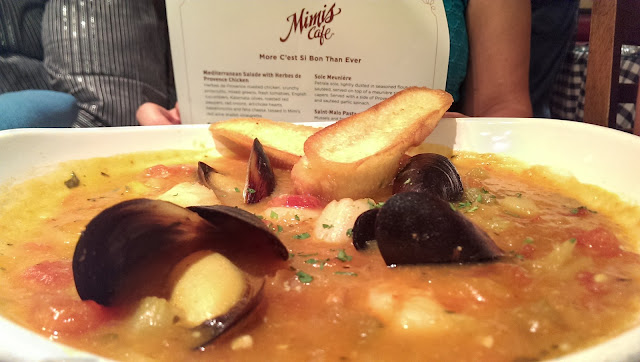 Mimi's Signature Bouillabaisse is a traditional Provencal-seasoned soupe with with mussels, shrimp and scallops simmered in white wine with potatoes and tomatoes.  Served with garlic French baguette croutons. 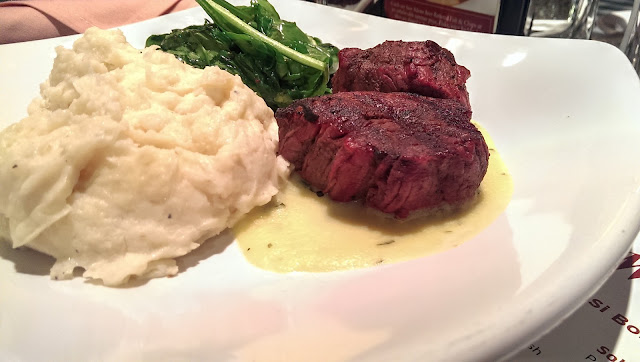 If you are looking for a little on the lighter side, the Grilled Salmon Salade Nicoise might be what you are looking for. A grilled Atlantic salmon served on top of mixed greens with Kalamat olives, cherry tomatoes, red onions, haricots verts, Provencal potatoes and hard-boiled egg tossed in Mimi's red wine shallot vinaigrette. 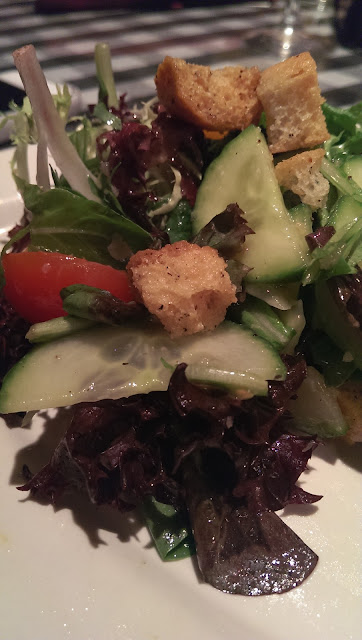 We ended the night trying the most decadent waffles! You can now find them at your local Mimi's Café. Don't they just make your mouth water? After the delicious meal that you see above, I could not take but a bite or 5 of these mouth watering breakfast desserts. 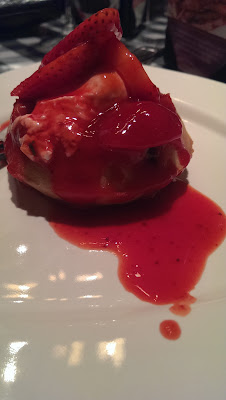 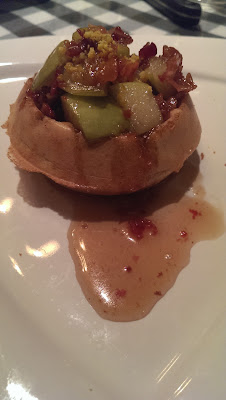 Mimi’s Cafe’s new breakfast menu will be served daily until 11:30am from Monday- Friday, and until 3:00pm on Saturday and Sunday. The company will also be releasing new lunch and dinner menus in October.

In addition, Mimi’s Café will be supporting Share Our Strength’s No Kid Hungry campaign, a national non-profit organization working to end childhood hunger in the United States. September is No Kid Hungry Month, and in an effort to raise awareness and make a significant contribution to this important cause, for every $5 donation received throughout the month, each guest will receive $10 in “Cafe Cash” to be used on their next visit (redemption restrictions apply). 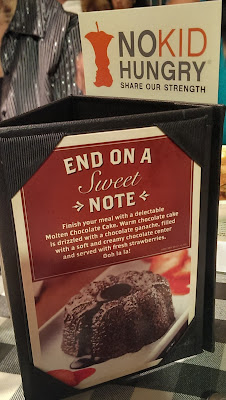 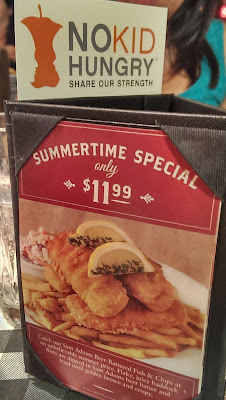 Additionally, on September 16, all guests who dine at Mimi’s and wear orange, the color of the No Kid Hungry campaign, will receive a complimentary muffin; and on September 17, kids eat free with any adult entrée purchase after 4:00 p.m. Guests will also have the opportunity to interact online. A Mimi’s Fan Challenge invites fans to learn about hunger awareness and earn great prizes like Cast Iron sets from Le Creuset®, Mimi’s gift cards and more on Facebook®. Visit www.facebook.com/mimiscafe for more information.

DISCLAIMER:  I was invited to taste the new French menu at a media night.  I received a gift card and samples from the Mimi's Café bakery for my family.  All ideas and thoughts are my own.  Do not use any pictures without permission.