FIRST PENGUIN CHICKS WADDLED ON EXHIBIT INTO
THE JUNE KEYES PENGUIN HABITAT ON TUESDAY, SEPT. 10
WHAT: Two Magellanic Penguin chicks made their way into the world, hatching at the Aquarium of the Pacific in late June to first-time parents Roxy and Floyd. Aquarium biologists led the penguin chicks as they waddled past the media before the birds entered the exhibit on September 10, 2013. The female is named Heidi, and the public will have the chance to name the male during an auction at the Aquarium of the Pacific’s tenth annual Sea Fare fundraiser on Saturday, October 19, 2013, which benefits the Aquarium’s education, conservation, and animal care programs.

The public can now see penguin chicks for the first time at the Aquarium’s June Keyes Penguin Habitat and during daily meet-and-greets at the Molina Animal Care Center. 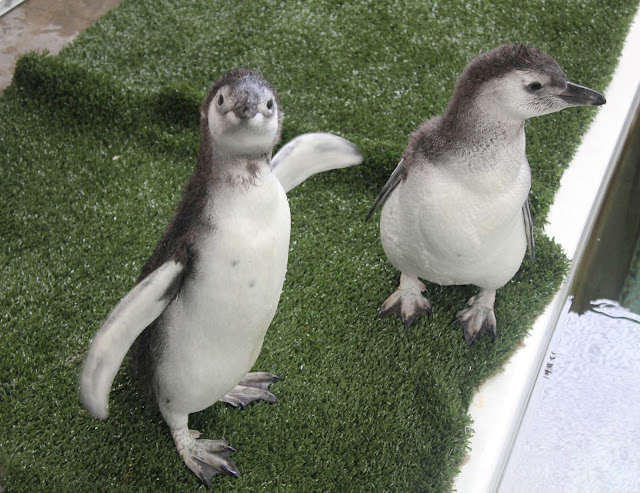 The Aquarium of the Pacific also has webcams in the June Keyes Penguin Habitat. People around the world can tune in to catch a glimpse of the chicks exploring the habitat. Cameras have been placed above and below the water, giving viewers an up-close and candid look at the lives of the Aquarium’s Magellanic Penguins. The webcams have been provided courtesy of explore.org, the philanthropic multimedia arm of the Annenberg Foundation.

The above water webcam at the Aquarium can be found here.

The below water webcam at the Aquarium can be found here.

Native to Argentina and Chile in South America, this penguin species prefers a more temperate climate such as that of Southern California than their Antarctic-dwelling cousins. Magellanic Penguin chicks hatch with their eyes closed and are able to open them about a week later. After about 90 days the chicks fledge, losing their downy newborn feathers, which are replaced with water-tight, sub-adult feathers. For more information about the penguin chick happenings at the Aquarium, please visit:

To see all of the Live Webcams: http://www.aquariumofpacific.org/exhibits/webcams/

SEA FARE: Help name the Aquarium’s male penguin chick during the auction at Sea Fare. Tickets to this event are $125 per person and include gourmet food and beverages, an open bar, and more. For information and to purchase tickets, the public can visit www.aquariumofpacific.org/seafare or call (562) 437-FISH.

DISCLAIMER: This is not a sponsored post. All ideas and thoughts are my own. I was given permission to use these copyrighted pictures. Do not use any pictures without permission.
Posted by Knotts Scary Farm 2019 at 11:00 AM