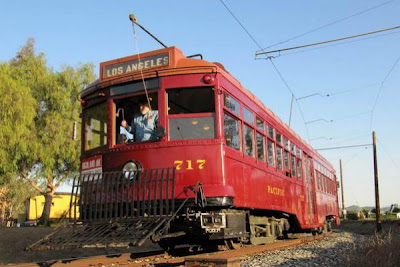 A shared love of trains brings out a unique bond between a father and his children. That's why the Orange Empire Railway Museum in Perris, CA will be rolling out the Big Red Cars for Pacific Electric Weekend on June 15 and June 16. Bring Dad on Sunday and enjoy a Father's Day Barbecue that will top off this family celebration of Southern California rail history.
There will be a full parade and display of the railway heritage museum's vintage collection of Pacific Electric Railway Company cars. The public is invited all day to ride, photograph and view the restored LA-area trolley cars that once traversed a 1,000-mile interurban electric railway system, the largest in America.
Also on display at the museum Town Hall will be a wonderfully detailed HO model trolley layout presented by the Southern California Traction Club.

﻿
Photo Courtesy of the Orange Empire Railway Museum
The menu for the barbecue is BBQ chicken, baked beans, corn on the cob, potato salad, cole slaw, corn bread and peach cobbler for desert. Price for the picnic lunch from noon to 2 p.m. is $10.00 per person. Diners must have a reservation. Call (951) 657-2605.
Admission and parking is free at the railway heritage museum at 2201 South A Street in Perris. Riding the trolleys and trains is $12 for 12 and up, $8 for  5 to 11. Four or younger is free.
Win Tickets! Enter Below.
a Rafflecopter giveaway
About Orange Empire Railway Museum
Orange Empire Railway Museum at 2201 South A Street in Perris operates a Museum Railway where visitors can ride on the historic trains and trolleys that helped shape the Southern California we know today. The Museum Railway operates every weekend and on most major holidays from 11 a.m. to 5 p.m., and also on weekdays forcharters and other special events. The Museum grounds are open every day from 9 a.m. to 5 p.m. with the exception of Thanksgiving and Christmas.
Disclaimer: This is not a sponsored post. I received no compensation.  All thoughts are my own.  Do not use any pictures without permission.﻿
Posted by Knotts Scary Farm 2019 at 8:30 AM