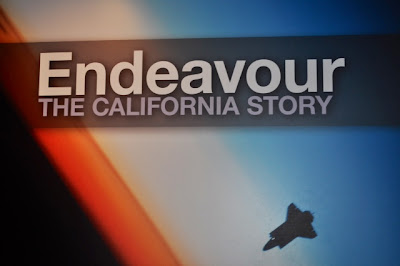 In October of last year, I posted about how I took my children out of school to see history in the making.  The Space Shuttle Endeavour was flying by and I didn't want to take the chance that they might miss it.

We waited on the top level of the Mickey and Friends Parking Structure at Disneyland with a thousand other people to get a glimpse of the piece of history flying over the Matterhorn.  It was 85 degrees that day with no shade.  It was worth every moment!  We cheered as it approached and waved madly at it in hopes that the pilot might see us.   The Happiest Place on Earth just got happier!  A day to remember always.

This last week, I was invited to relive seeing the Endeavour with  my family at its new home at the California Science Center in Los Angeles by Toyota Motorcars to watch the unveiling of the new 2014 Toyota Tundra. 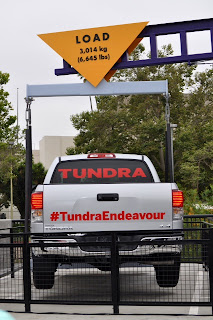 As some of you  may know, the new 2012 Toyota Tundra CrewMax, 1/2 ton pickup truck that was stock with a standard engine towed the 292,500 lb Endeavour and its towing mechanisms across the 405 freeway for a 1/4 mile in 4.5 minutes.  I don't know much about trucks but I do know that our F150 truck struggled pulled our Toy Hauler Trailer camping.  The Tundra seems impressive to me.  The inhabitants of the Tundra being towed included, professional driver- Matt McBride, Former NASA Astronaut- Garrett Reisman and Toyota executive- Ed Laukes. 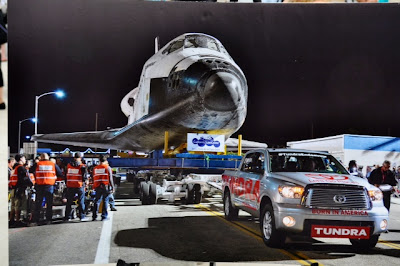 The Endeavour's new home at the California Science Center in Downtown LA, is a fitting place since it is housed near the historic Los Angeles Coliseum built for the 1984 Olympics.  An area rich in history and a  great place to take the family!

I was invited by Toyota to check out the new learning tool outside the Endeavour that showcases the actual Toyota Tundra that towed the Endeavour, being lifted by a pulley system and you!  We witnessed Garrett Reisman and 2 five year olds lift the Tundra 3 feet into the air! 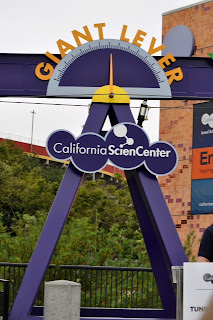 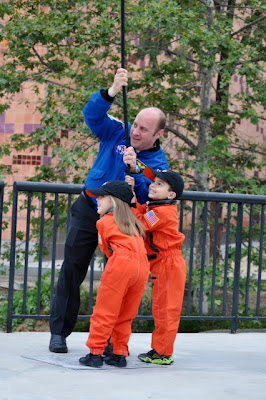 After the unveiling, we had the chance to look at the truck up close and talk to Mr. Reisman about his time in space.  Did you know the Endeavour orbited around the earth 4,671 times?  It was built after the tragedy of the space shuttle Columbia.  To get the chance to let my children ask questions of a real live astronaut brought back so many memories of wanting to fly into space since I was a young girl. 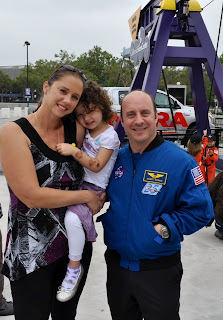 We were able to take a tour of the hangar where the Endeavour rests and were in awe of its size.  We learned so many new things about space travel from all of the interactive exhibits that lay in the museum!  Did you know that the space potty has a camera in it so they don't miss?  Yes... this fact fascinated our children to no end!  Watch the actual video from the exhibit!

There was a simulated Control Room where you can picture yourself counting down as the shuttle lifts off! 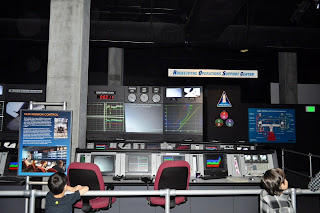 After we wandered through the Samuel Oschin Space Shuttle Endeavour Display Pavilion, we got a glimpse into the SKETCH Foundation Gallery Air and Space Exhibits where we saw satellites up close and even a life-size model of the Mars Rover! 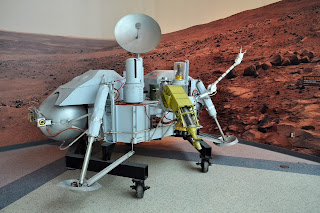 Realizing that it was getting late, we decided to head home for lunch and return another day.  This is possible because the CA Science Museum is absolutely free!  There is a fee if you want to watch the IMAX movies but it is a nominal fee.
This museum is a two day museum at least!  Take your time and enjoy sharing our space history with the next generation.  Who knows! Your little one might be a future astronaut like Garrett Reisman!
More facts about the Toyota Tundra:
Engine:  5.7-liter aluminum I-Force 32- valve V8
Horsepower: 381 @5800 rpm
Torque: 401 lb.-ft @3600 rpm
Transmission: 6 speed electronic automatic
Curb Weight: 5625 lbs
Gross Vehicle Weight: 7200 lbs
Towing Capacity: 10,000 lbs
Height: 76.0"
Width: 79.9"
Length: 228.7"
Wheelbase: 145.7"
Front/Rear Track: 67.9"
Ground Clearance: 10.4"
Mileage: 13mph city/17hwy
Base MSRP: $34,630
DISCLAIMER: This is not a sponsored post.  All thoughts are my own.  I received IMAX tickets and a tour to visit the new exhibit.  Do not use any pictures without permission.
Posted by Knotts Scary Farm 2019 at 6:30 AM