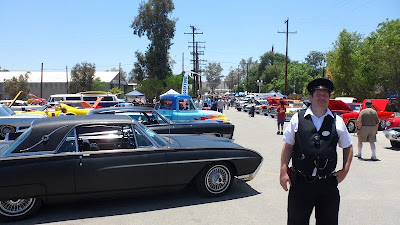 Do and your family like classic cars? Motorcycles? Trains? This is one event that you don't want to miss!
Retro cars to delight motor fans and families at Rods & Rails Show at Orange Empire Railway Museum
The 14th Annual Rods & Rails Show and Potato Festival promises to be a huge hit for lovers of classic cars, trains and Perris history who drop by the Orange Empire Railway Museum on Saturday, June 8 from 9 a.m. to 5 p.m.
The annual festival, which is free to the public, is expected to draw more than 5,000 people. The event, sponsored by the City of Perris, features pre-1980 muscle cars, hot rods, classics, street machines, pony cars, lowriders, pre and post war trucks and all makes and models of motorcycles.
Visitors will enjoy live rhythm and blues music, great food and performances by the Wild West Temecula Gun Fighters. There will be lots of fun for children including the Franklin Hayes Marionettes, a young talent showcase and youth bicycle show. The day also includes the Potato Festival, which is a tribute to the Perris Valley's agricultural roots.
The Orange Empire Railway Museum features one of the largest collections of rolling rail cars in the U.S. Visitors can enjoy trolley and cable car exhibits and rides.  Admission to ride is $12 for ages 12 and up and $8 for ages 5 to 11.  For information about the car show, call the City of Perris at 951-943-6603.

About Orange Empire Railway Museum
Orange Empire Railway Museum at 2201 South A Street in Perris operates a Museum Railway where visitors can ride on the historic trains and trolleys that helped shape the Southern California we know today. The Museum Railway operates every weekend and on most major holidays from 11 a.m. to 5 p.m., and also on weekdays forcharters and other special events. The Museum grounds are open every day from 9 a.m. to 5 p.m. with the exception of Thanksgiving and Christmas.

DISCLAIMER: This is not a sponsored post.  I received no compensation.  All thoughts are my own.  Do not use any pictures without compensation.
Posted by Knotts Scary Farm 2019 at 6:30 AM