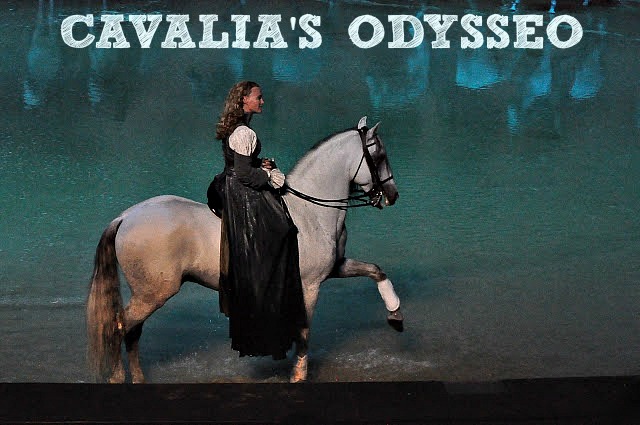 I am sure that you have seen the colorful signs throughout Southern California.  The signs that have the mystical and alluring name of Odysseo!

What is Odysseo? Why would you want to see it? Even if you are not a fan of horses, anyone who can appreciate the beautiful marriage of man, horse and nature would be amazed at what an incredible show this is.  According to the Miami Herald, "If Walt Disney were still alive, he might create a show as magical as Cavalia's new Odysseo"!

I had the absolute fortune to be invited to the VIT (Very Important Tweet) Party at one of the shows in Burbank, CA.  That night, I attended the show with other like minded bloggers and were treated to the same VIP treatment that anyone can purchase.  Our goal that night was see firsthand what all of the excitement was about and let our readers know about it as soon as it was known to us.

As we drove up the 5 freeway on our way to Burbank for the show, I was hoping that I wouldn't miss my exit because I was new to the area.  No worries about knowing which exit to take because of the 110 foot tall white tent(size of a 10 story building and as long as a football field)  stood proudly off the side of the freeway! I was in so much awe of this tent, I did indeed miss my exit.

In front of the biggest white tent I had ever seen, stood the colorful Odysseo sign that had taunted me for weeks around town. 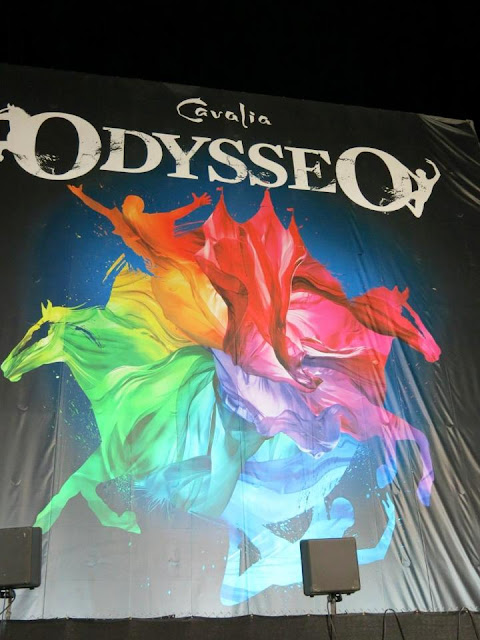 Walking towards the entrance of the tent were many fascinating black and white photos that hinted at the show to come. 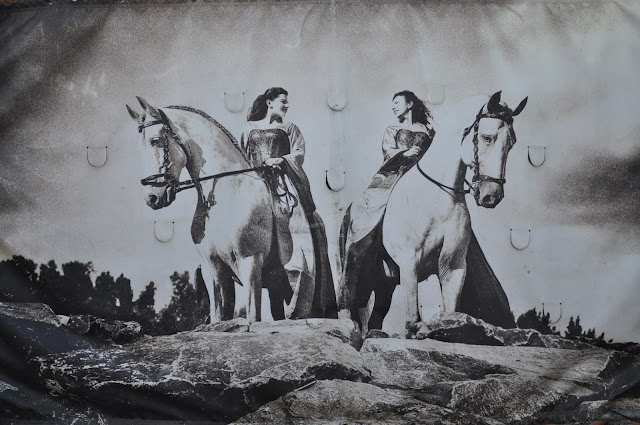 As we walked into the VIP area, we were treated to an exclusive spacious tent which was filled with comfortable seating and a delicious buffet of seafood, delicacies, fruit and vegetarian dishes. 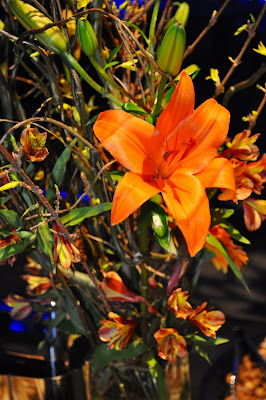 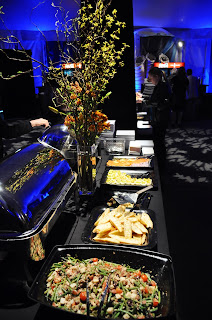 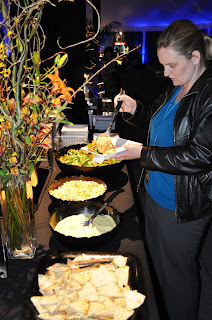 There were spirits to enjoy, desserts after intermission and as VIP ticket holders, we were also treated to a stable tour where we met with various artists and got to meet the stars of the show, the horses.  We were treated like royalty.

There were no long lines to buy the wide array of souvenir's as we had our own booth at our leisure.  Not only were there small trinkets such as key-chains and programs to buy but clothing and jumping stilts were there too.

If you were more interested in the more unique, actually used horse brushes, horse shoes, saddle pads and polo wraps were available.

While we enjoyed the luxurious accommodations, we posted photos and every moment enjoyed during the show on Twitter, Facebook and Instagram!  While we know that pictures tell a thousand words, Odysseo would take a thousand thesaurus' to describe! I hope that I captured enough photos to share with you for this incredible event.  I took over 500 photos and had to cut it down to my favorites for this review.  While my words may be few, it is only that I feel that in this case, pictures speak oh so much louder! I will let the pictures tell the story.

The time had come for the show to start and we headed to the "Mane" Event.  The main tent, which holds 2000 people, seemed to have no bad seats.  The stage was 27,000 sqft and the screen filling the backdrop was as big as big as 3 IMAX screens and had just as good quality!  The music that plays throughout the show, was played live by musicians that were partially hidden in the wings of the stage! 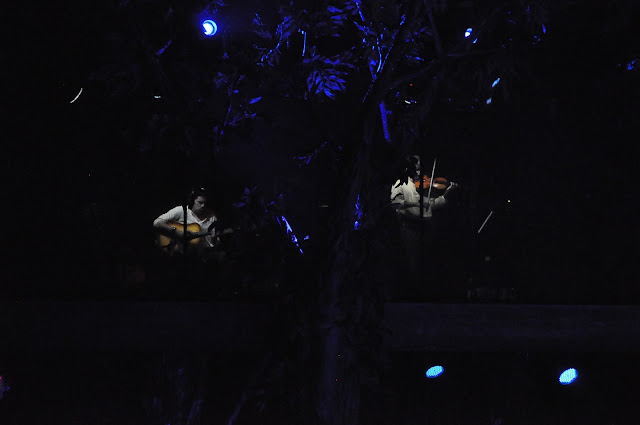 The show started off with young horses enjoying the freedom of being horses! Racing around the stage kicking up their hooves in glee, these young Arabians looked like the wind themselves.  In each scene, the stage transported us into forests, deserts, plains and even the Wild West! 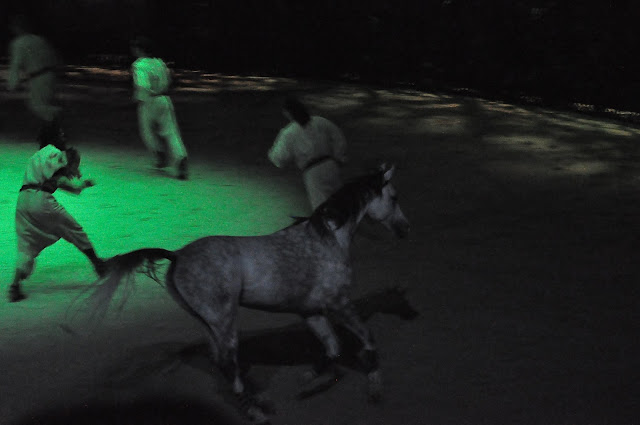 "Epona" (Goddess of the Horse) Introduced the trust and partnership the artists have with their beloved horses. 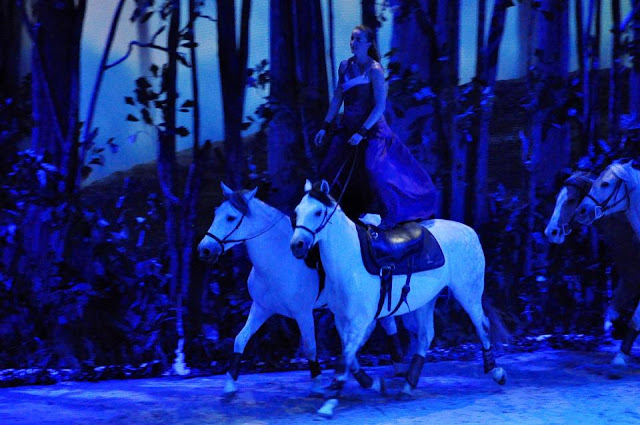 "Fete de Village" left us wondering, who could jump higher? Man or Horse? 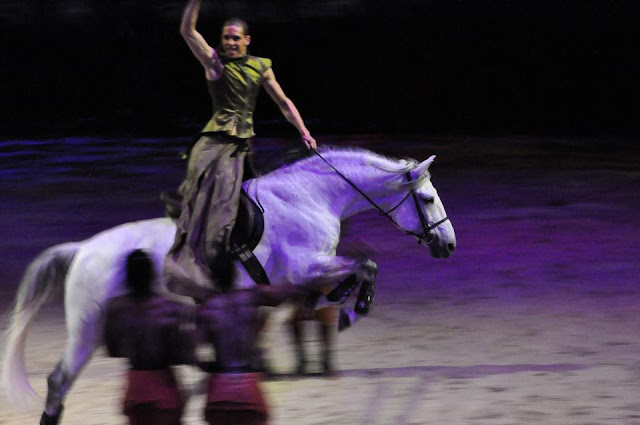 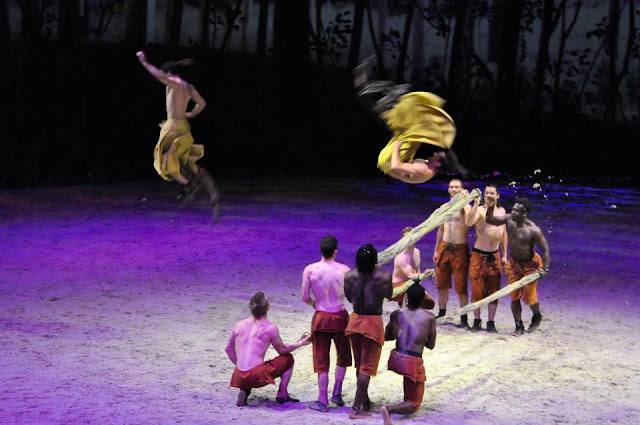 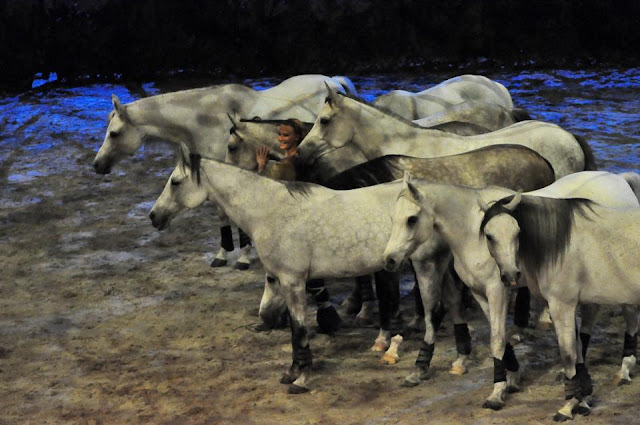 "Grand Cavalia" across the Plains showed off amazing costumes 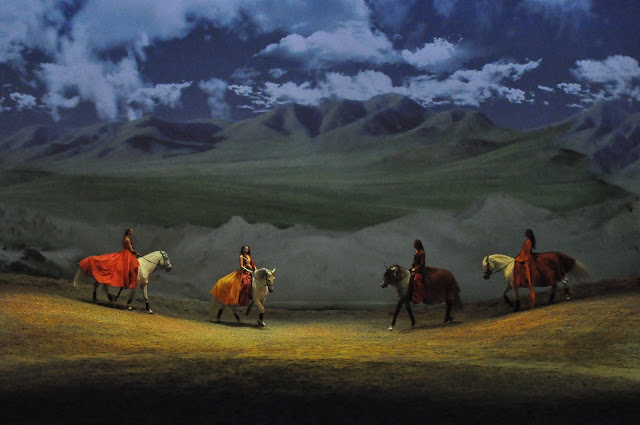 "Carosello" brought us into a world of carousels with live acrobats that defied gravity! 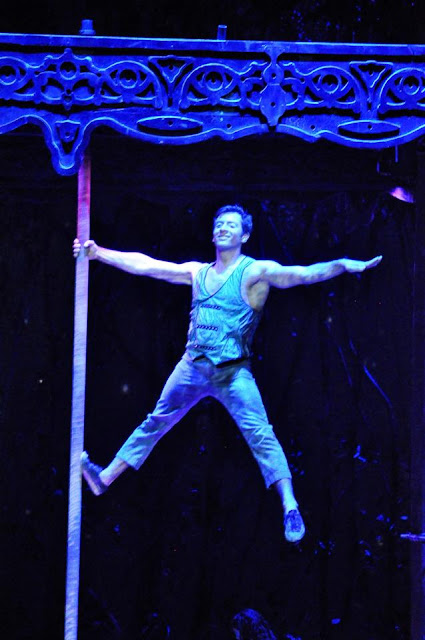 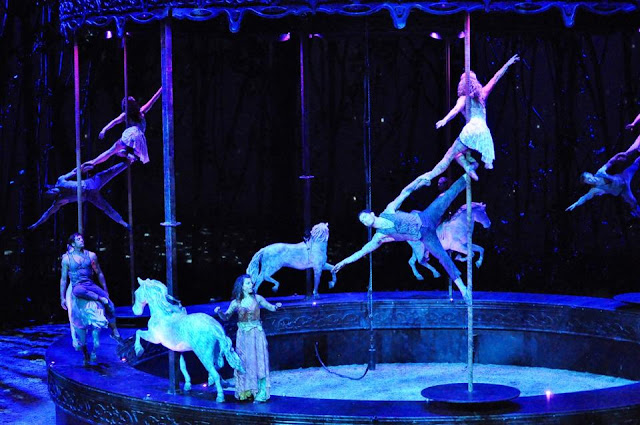 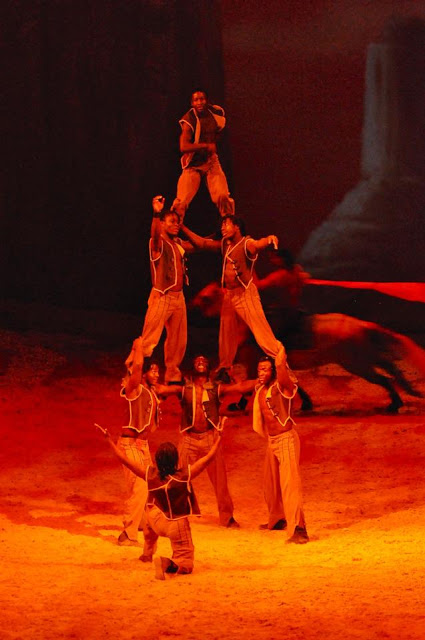 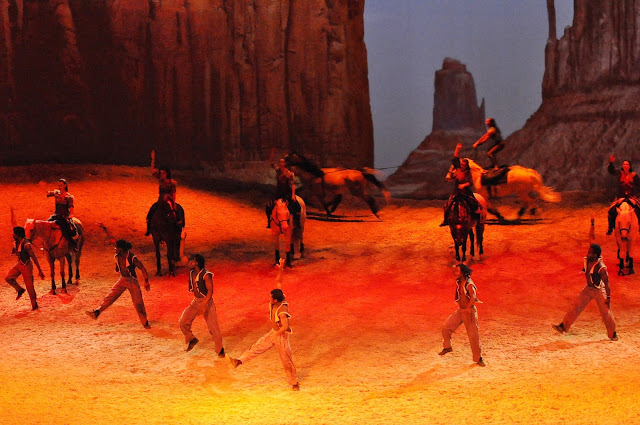 "Oasis" You can lead a horse to water... 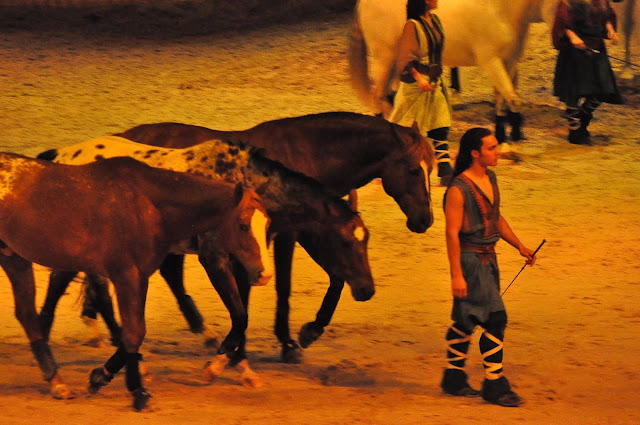 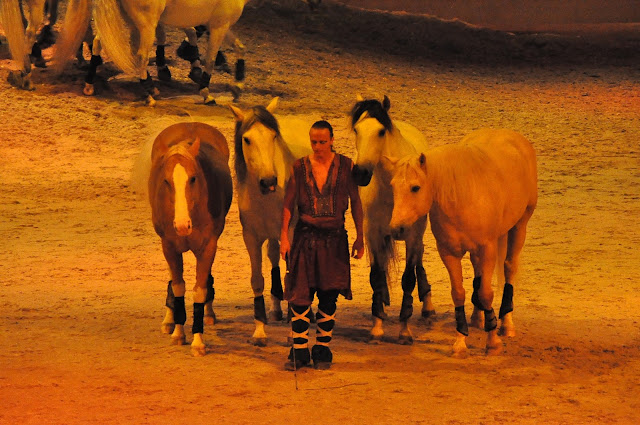 "Tempete" the aerialists danced through the air while barely holding on! 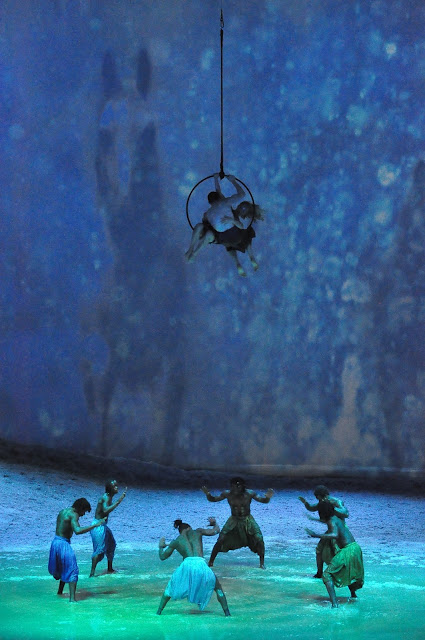 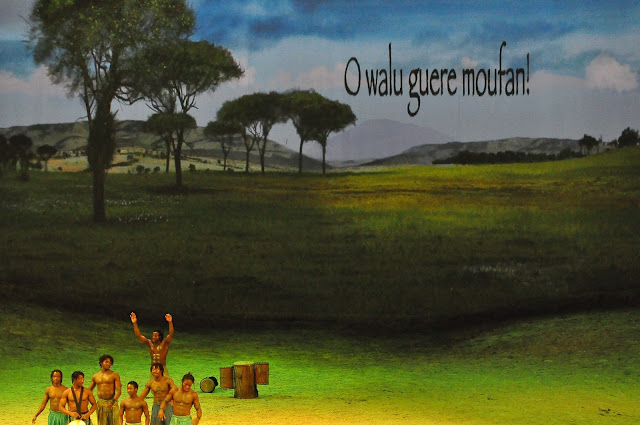 "Paseo" the riders balancing precariously on the backs of horses, two at a time! 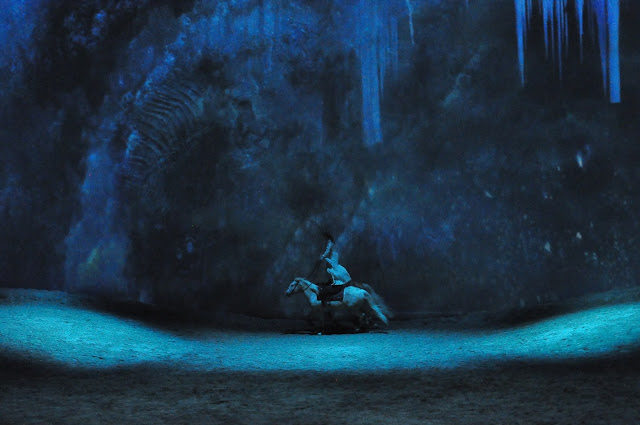 "Yhi" Goddess of Light and Creation 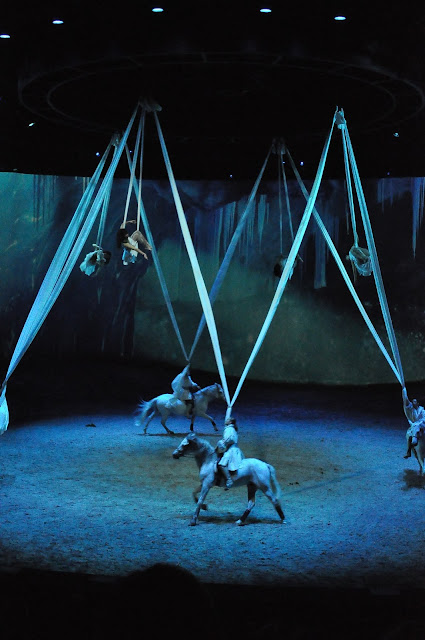 "Nomades" showed us vaulting at its best! Hopping on and off galloping steeds. 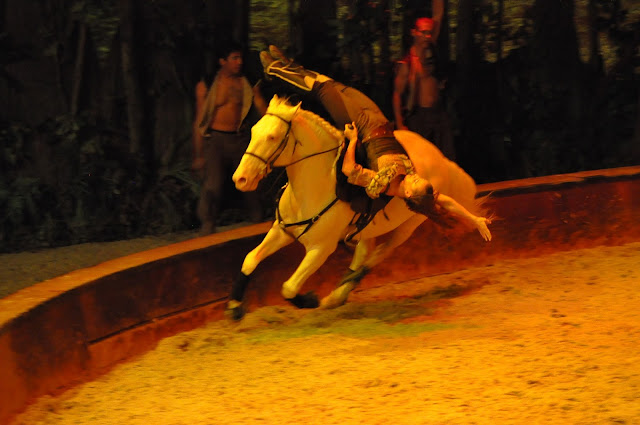 "Les Voyageurs" The stage was flooded with 80,000 gallons of water for the finale! 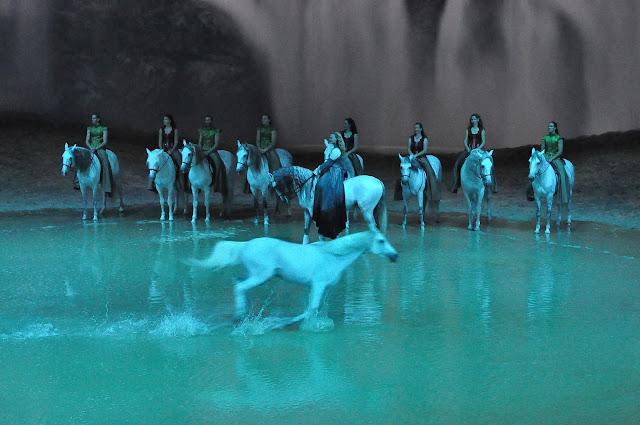 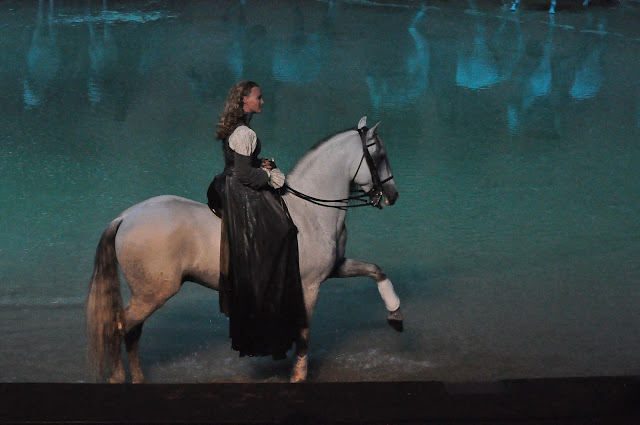 It took 15 minutes after the finale to drain the water!  After the amazingly beautiful ballet on water, we were given a tour of the stables and were able to meet some of the two and four legged stars!  We could clearly see how much the horses were loved by their caretakers and the artists themselves cared for their four legged stars.  While not all the artists spoke English, their love showed clear. 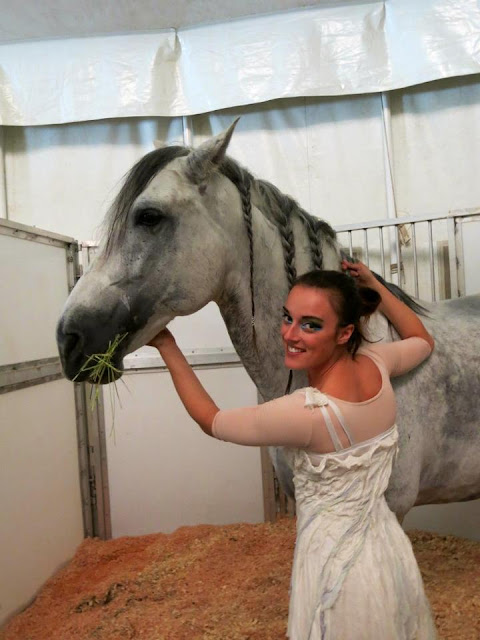 A normal tack room or the area to store saddles and other equipment would hold saddles, bridles, pads, wraps, and other important equipment for 5-10 horses.  Odysseo's tack room held enough for 67 horses! 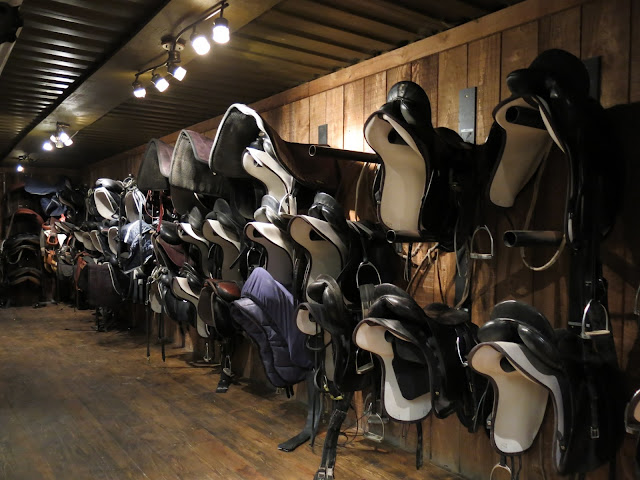 I hope that by now, you realize how much this show meant to me and anyone that loves horses!  I cannot say enough about Cavalia's Odysseo and urge you to see it!  I have seen nothing compare to this partnership between horse and man.  It is my hope that when Cavalia returns to Southern California, that I may again witness this and any future shows they might produce.

If you would like more information on tickets or future locations for the show, please check out Cavalia's Odysseo online.

DISCLAIMER: I received no compensation for reviewing Cavalia's Odysseo. I was given tickets to watch and review and all thoughts/opinions are my own. All photos are property of Trail Mixed Memories. Do not crop, copy, or reproduce any photos without permission.
Posted by Knotts Scary Farm 2019 at 6:30 AM