Picking Flowers in the Outfield- learning from my son 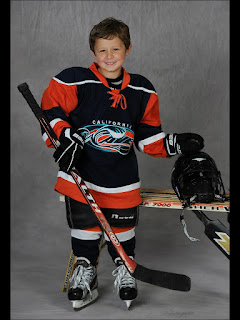 Anyone who has young children(and some not so young) has had experiences with "that child". The child that misses the ball in the outfield because he is too busy picking flowers or playing in the dirt.

With spring approaching, children start coming out of their winter in-activities  and get ready for Spring sports!  My son has decided that after playing hockey for the last three years, he was ready for a change.

Since we start our children with sports early(3), we always told them that we would support them in any activity they wanted to try as long as they give it a wholehearted chance.  For the first two years of playing hockey, my son was off making snowballs in the corner while the others were learning the ways of the sport.  After every practice and game we would ask him if he really wanted to continue playing hockey and he insisted that he did. He would make small improvements and after two years, he started getting into the game.  While my husband and I were cringing at the cost of league fees, lessons and gear, our son was learning how to be a kid.  Not the next Gretzky, just a normal kid with dreams of playing with his friends and becoming a "dinosaur digger" when he grew up.

Many days I would get so frustrated with the little to no progress that he made in hockey! I considered getting him private lessons to get him up to speed with his teammates.  I saw other kids his age being pushed by their parents to do their best while spending hundreds of dollars a month on private lessons and special gear.  Most of the kids that play hockey, play hockey for the love of the game and want to play to be in the NHL when they grew up.  That is fine when your child is driven and very competitive and its what the child wants.  My son is a sweetheart who thinks of others before himself and is very caring.  I think as sensitive as my son is, he would pickup on the frustrations of me not knowing what to do as a sports mom. I think he was torn whether he really loved playing hockey or was it because we, loved him playing hockey and he didn't want to disappoint us.

I feel that I could have become one of the parents that would focus solely on one sport and push hard if we weren't off doing other activities.  Every parent wants our children to succeed at everything they do, it's natural for a parent to feel that way.

I look back at the last couple years and realize that while I wanted my son to succeed at hockey, I might have begun to fail him while pushing him to do his best when he was doing his best, at being a kid. My son did his own thing, learned at his own pace and generally didn't let anyone or anything influence him.  When he asked us after 2 1/2 years to stop playing hockey, we were heartbroken... I'm not going to lie.  However, I was actually relieved.  It was very stressful trying to find a way to help my son fit in with his team while I was fitting in with the much more driven parents.

Now that my son has started Tee-ball, I see my son break dancing on third base and think, here we go again with a smile.  Yes my son will be THAT kid picking flowers in the outfield and he will probably never get to the World Series without buying a ticket but my husband and I will continue to support our children in everything they do but first we are going to let them be themselves as a kid.
Posted by Knotts Scary Farm 2019 at 1:12 AM